Best tourist attractions in Augsburg in one day 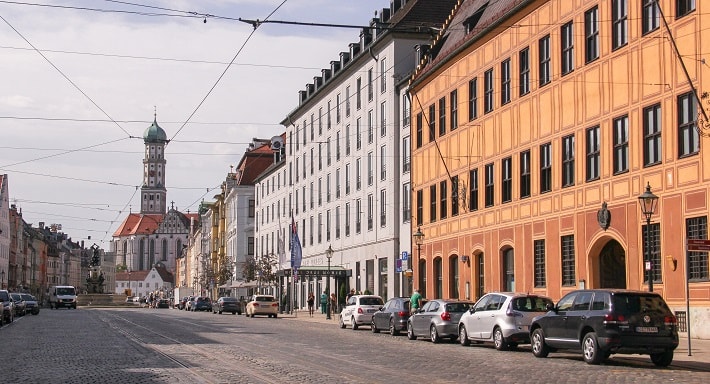 Best tourist attractions in Augsburg for one day are diverse and interesting to experience, so make sure not to skip this picturesque city when traveling around Germany – especially if you are stoping in Munich or Ulm. 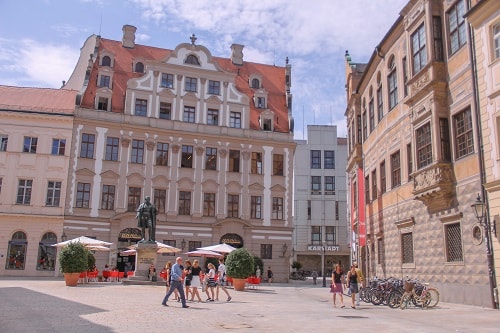 Best tourist attractions in Augsburg in one day?

Augsburg is the third oldest town in Germany – right after Neuss and Trier. It was established by Romans, which named it after the Roman emperor Augustus.

Due to the fact that Augsburg is rich in history, you could be busy exploring more than for a day, but nevertheless, check out our best tourist attractions in Augsburg, which should not be missed when visiting.

The most famous brewery in Augsburg is for sure the Riegele Brewery, which was founded by Sebastian Riegele in 1884, when he bought and took over the old brewery known as »Zum Goldenen Ross«, which was producing beer since 1386. 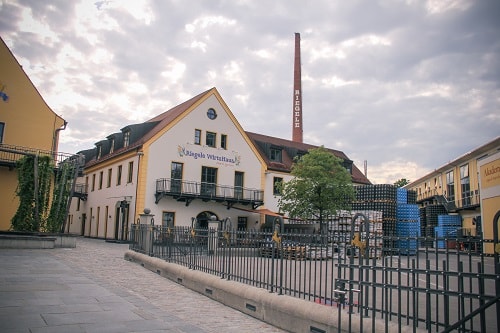 The Riegele Brewery (Best tourist attractions in Augsburg in one day)

You can take a guided tour with tasting at the Riegele Brewery or just try its beer at their beer garden in vicinity of the brewery.

The artificial whitewater canal was built due to the summer Olympics in Munich, which took place in 1972. They used the Eiskanal for the canoe slalom race. 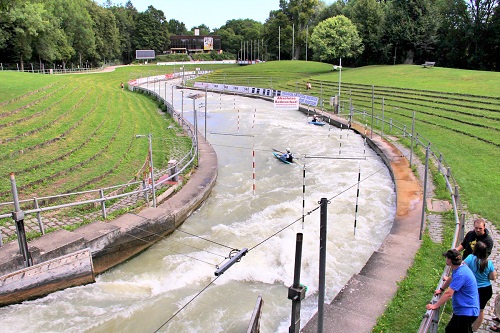 Eiskanal (Best tourist attractions in Augsburg in one day)

Ever since then the Eiskanal is popular among locals as a nice area for relaxation and also among professional canoeists for training and competitions.

The Augsburg’s old city center was almost completely damaged during the WW2, but nowadays, when all the old buildings were rebuild, you cannot really tell, that all these was once gone. 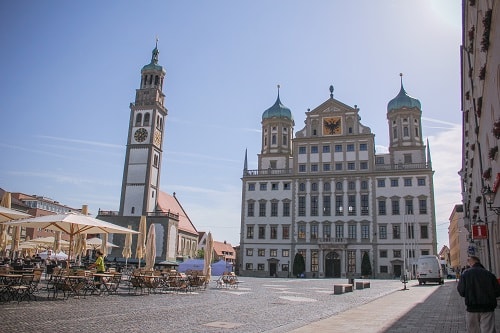 The town hall (Best tourist attractions in Augsburg in one day)

The old city center is beautiful, so don’t miss a walk around its cobbled streets, visiting the City Hall with its golden room and just admiring the historically important buildings. 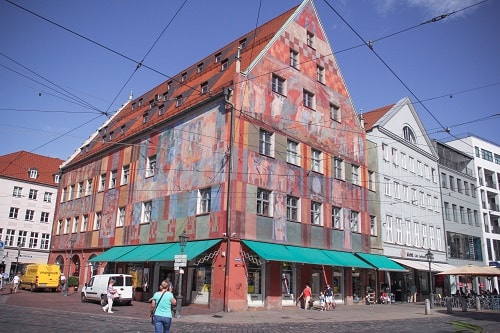 Even though you have only 24 hours in Augsburg, the Fuggerei is a must place to see and visit.

The Fugger family has been important family for Augsburg for centuries. In 15th and 16th century they were mostly known as bankers from where they also got their wealth and power. Even though the Fugger family was extremely rich, they did not forget the ones in need. They were the first in the world, who built the social housing complex in 1516, what is now the oldest one in the world. 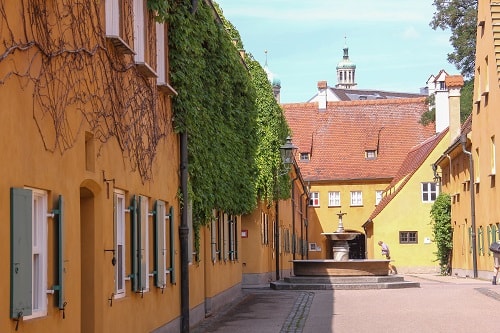 The Fuggerei (Best tourist attractions in Augsburg in one day)

The Fuggerei has been a social housing complex with residences ever since it was built, but now, it is also open to the public and tourists, who can visit the Fuggerei by paying 4€ admission.

The Fugger family each year runs a list of people, who get the housing units for as little as 0,88 EUR per year. The rent is still the same as 500 years ago and equals to one Gulden. Each unit comes with modern conveniences and consists of 45 to 65 m2. 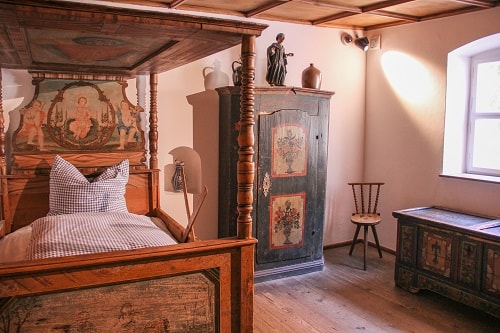 Not everyone can get the right for living there and the rules have stayed untouched ever since:

One of the most interesting facts about the Fuggerei is that its gates are locked at 10 pm every single day. There is only one entrance, which can be used after this hour and if you cross it, you are fined for a bigger amount than a yearly rent.

The Fugger family philosophy is that a decent family and hard working person should be home before 10 pm.

Puppenkiste is a marionette theater in Augsburg, which was founded in 1948. Ever since then the plays for children and adults are being performed there. Due to some TV series with plays, these marionettes became famous all around the world.

The name of Puppenkiste comes from the fact, that the puppets with the transportable theater were all put in one wooden transport box.

Nowadays the Puppenkiste is a theater and a museum as well, so don’t forget to miss it, when traveling to Augsburg with kids.

Augsburg has a good opera house and every summer they move one play outdoors to a so called open-air grandstand or in German Freilichtbühne.

The plays with the big stage are amazing, so book a ticket if you are keen on opera.

If you are traveling to Augsburg with kids, a visit to its ZOO is something you should not miss. The ZOO is not as big as the one in Munich, but the animals and outdoor playgrounds will definitely put a shine on the little travelers. 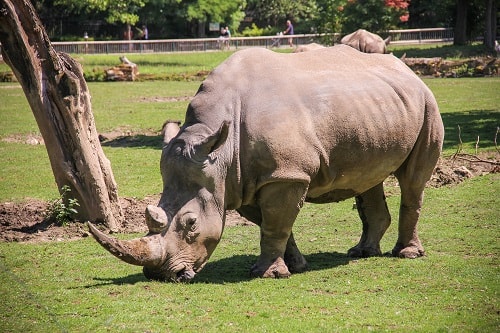 Just opposite the ZOO is also the Augsburg’s Botanical garden, which spreads out on 10 hectares. The garden is mostly known for its beautiful Japanese area, which you will enjoy for sure if you like peace, quiet and nature surrounding you.

You will probably have the cheapest and also delicious bites at the local market, which serves local and exotic specialties (from Greek to Italian, Vegan and Asian food). You will find daily menus for less than 5 Euros there. Another good option for lunch or dinner is visiting a Beer garden – we loved the one at the Riegele Brewery. 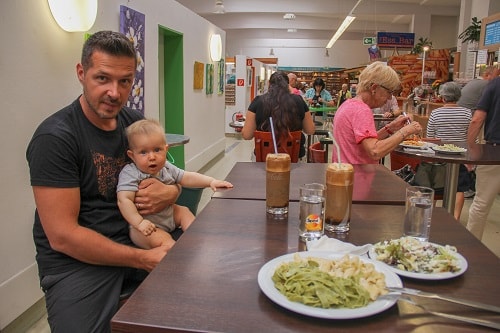 Augsburg has plenty of different accommodation options to choose from, which you can check here.

We stayed one night at the Hotel Am Alten Park, which is close to the central train station and just across the Riegele Brewery, what makes it a great location. The city center can be reach by foot in around 15 minutes.

There are buses and trams available, which can take you everywhere. A great way to explore the city of Augsburg is by bike or on foot too – especially if you decide to wander just around the old town.

You will need one-time ticket or a day ticket for the buses and trams. Its price depends of the zones you need to be include in it.

There are many more tourist attractions in Augsburg, which can squeeze in your one day travel itinerary, but sometimes less is more. The city is also a nice stop-over if visiting the Legoland theme park, which is just around 30 minutes drive by car away.