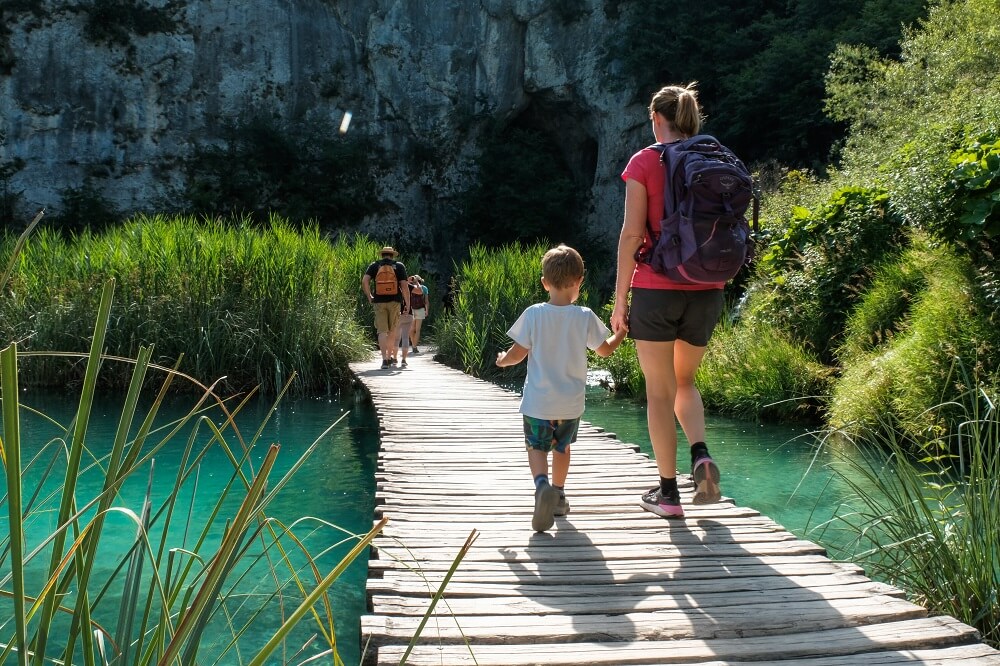 Plitvice lakes are amazing and if you are keen on nature, outdoors and hiking, you definitely should put them high on your Croatian bucket list.

I have visited Plitvice lakes two times and every time I found myself there, I know I will come back for more. The unspoiled and magnificent nature is so picturesque you can easily stare and admire it for hours.

Easy hiking on nicely maintained paths and footbridges show you what Plitvice lakes are all about. Lake after lake with numerous cascades and waterfalls, including the highest in Croatia with 78 meters, make your soul full with stunning nature scenes. You will find 16 lakes in Plitvice all together, including the sandstone canyon, what makes all the views even more spectacular.

Exploring the natural park Plitvice lake will soon show you, why the park was declared as natural UNESCO world heritage place in 1979.

When is the best place to visit Plitvice Lakes?

Plitvice lakes are open all year round and there is actually no bad time to visit them, as each time of the year gives different views, which can sometimes feel like pure magic.

But in general, most people come during the summer, joining the visit with holidays in Croatia, what makes the place more crowded than the rest of the year.

Who can visit Plitvice lakes?

If you are keen on nature and hiking you surely came to the right place, as Plitvice lakes are perfect for outdoor enthusiasts.

But even though you are not in a good hiking shape don’t be turned off to quickly. There are seven different hiking routes available – some start at the entrance 1 and some at the entrance 2. The shortest path is 3.500 meters long and takes around 2-3 hours, when the longest is 18.300 meters long for which you will need around 6-8 hours. To plan your hike better, you can download their mobile app.

As we have been visiting Plitvice lakes with our 4-year-old, we have decided for the B route, which was 4.000 meters long and included a ride with an electric boat and panoramic train too. We needed around 4 hours with stops to finish it.

Dogs are allowed, but they need to be on the leash.

As for baby-srollers, I would rather recommend you to visit the park with baby-carrier, as there are some areas with stairs. But majority of the B route we did, was OK for strollers. So if you don’t mind lifting the stroller on some parts, you will be OK with it too.

You will also find some benches along the path, where you can sit and rest or just admire the views. At the electrical boat station is also a cafe and the toilet.

Even though the national park Plitvice lakes is open all year round, most people visit it during the summer. If you want to avoid the crowds, be there as soon as it opens – 7 am. The hike will be cooler and you will not need to wait long for taking the e-boat and panoramic train ride either.

Don’t forget on appropriate shoes for walking. A drink with snacks will might be a good idea too – especially if visiting with kids or doing a longer hike.

If you just don’t want to deal with crowds, you might want to consider coming off-season (November-December and January – May). Not only you will have the place almost to yourself, you will also pay less for the tickets.

How much does it cost to go to Plitvice lakes?

The entrance fee depends greatly of the time visiting. If you will be there during the high season, the tickets will be much higher than coming off-season. You can check more information about the tickets here.

A good news is also the fact, you can book your ticket on-line, what is best to do during the summer, avoiding waiting in ques.

There are two entrances in Plitvice lakes and each has its own parking space. The parking is payable. (we paid 10 Kuna’s per hour)

Each entrance has some fast-food restaurants and snacks, but if you really want to eat good local and traditional food, you have to stop at the Lićka kuča restaurant at the parking place entrance 1.

They have delicious food there and no matter what you will have, you will not be disappointed. They are most famous for different meat dishes – slowly cooked under the charcoal. Simon had extremely soft beefsteak and I was very impressed over the home-made filled ravioli. Yummy!

If you only want to stop here for lunch / dinner, without visiting Plitvice lakes, have in mind, they cover 2 hours of free parking, just give them the parking ticket for confirming it.

There are many accommodation possibilities around Plitvice lakes national park – from apartments, hotels to camping places. We spend a night in Korana camp – 8 kilometers far from the entrance 1.

The Korana camping is huge and what we like best is, it still looks very natural. You can stop your camper or pitch a tent where ever you like. The toilets and showers are nicely done and big enough too. There is even a restaurant and grocery shop. If you are traveling with kids, you might only be missing some playgrounds.

A very useful feature of the camping place is its free shuttle to Plitvice Lakes and back – ask at the reception for more information about the schedule.

The Korana camping has a really good location for further exploration of Plitvice lakes greater area. Some stop here for cycling as there are several interesting places to reach by bicycle too.

What to see around Plitvice lakes?

Apart from the amazing lakes, you can easily spend several days in the area. Visitors mostly decide to see the old Tito villa, the old airport Željava, Puškariča underground cave and Plješivica mountain.

As we only stayed one night at the camp, we only did a quick afternoon trip to an old mill Mlinica and an old castle Drežnik, which can even be reached on foot from the camping place Korana.

Not far from the camping place, you will also find a deer farm, but you need to book your guided tour in advance, what can be a bit tricky during the summer, so make sure to do it few days ahead.

With no doubt Plitvice lakes are very special place, where you will be greatly rewarded with amazing landscape, stunning views and picturesque hiking paths. I cannot wait to visit Plitvice lakes again and see them in different time of the year too.

The blog post was written in collaboration with Plitvice lakes national park and we are very grateful that we were able to enjoy all these beauties together as a family.