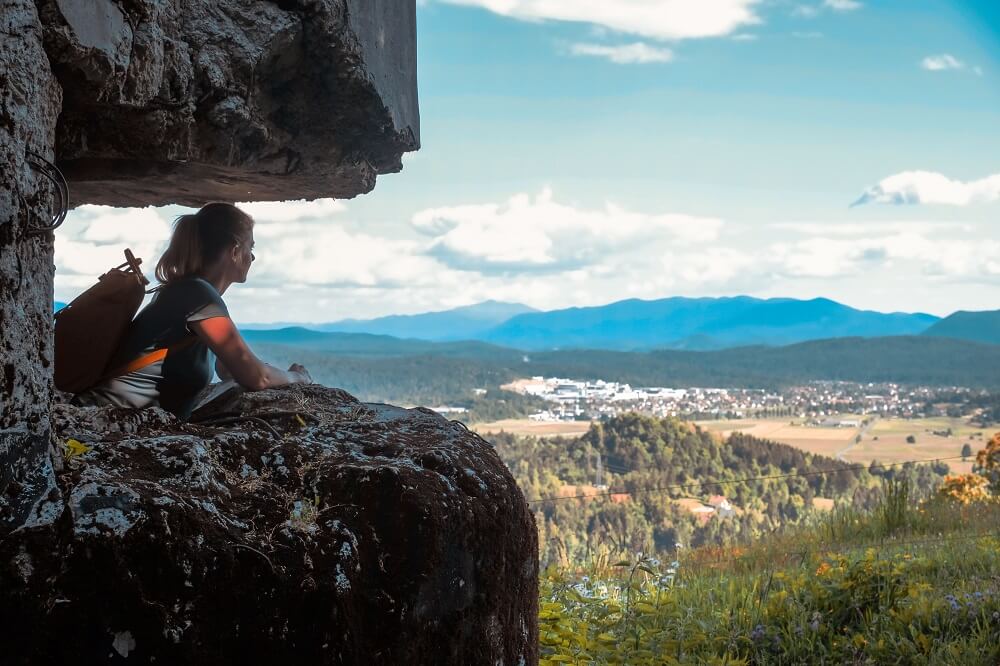 In search of hidden gems of Slovenia we have found ourselves at the Rupnik line several times. Rupnik line is not known to many and that is why it makes it even more spectacular.

What is Rupnik line?

The Rupnik line was a line of fortifications running along western Slovenian border, as protection against Italian invasions. It was named after Leon Rupnik – Slovene general in Yugoslav army. The Rupnik line comprised of more than 100 bunkers, including three larger underground defence complex – Hlavče njive, Hrastov grič and Goli vrh. The complete Rupnike line was built by more than 60.000 soldiers and civilians, but with the 2nd WW started, construction stopped and the Rupnik line was never used.

Where can you find the Rupnik line?

You can find many places in Slovenia, where the ruins of Rupnik line can be found – some are better preserved than the others, but if you are looking for some of the best preserved samples and you like to hike, don’t miss some of Slovenian mountain peaks like Blegoš, Porezen and Ratitovec. So far we have visited three areas where the Rupnik line run and they were overwhelming.

Some of the best examples of the Rupnik line can be found in Poljanska valley, from Blegoš Mountain to Goli vrh hill. The underground defence complex at Goli vrh is actually the best preserved and distinguished one. You can attend the guided tour into the inside every first Saturday each month. The starting point is at the entrance of the complex at 10 o’clock in the morning. Bring a light and comfortable shoes.

When I first seen Unec collapse valley, I was so impressed over it, that I could not help asking myself, why it is still so unknown and primal. Well, but luckily for us, as exploring the place is a true and unforgettable experience. Unec collapse valley is actually a natural Karst depression with steep and vertical slopes. It is 100 meters deep and 150 meters wide. You could hike all the way down, where you can find unique flora and fauna, but note that the path is very slippery and can be pretty dangerous too.

Unec collapse valley is a special natural inhabitant, but for me, it was exceptional because of its underground tunnels. There are 15 kilometers of underground tunnels around it, which were built between both world wars by Italian soldiers. The tunnels enabled them to have an »easy« and hidden access over the Slovenian grounds. We can now walk freely around 1,5 kilometres of tunnels – the rest were walled up and flooded.

There are no guided tours available as this is a true walk into the primal and rough historical ruins, so make sure to bring good shoes, warm clothes and a head-light for exploring.

The tunnels have several entrances, but we have chosen the upper one – if you are looking at the informative board about Unec collapse valley, a narrow path runs behind you, along the collapse valley. It will first bring you to the ruins of an old barracks. Passing them, you find the entrance to the tunnels. Walk down the steep steps to the first crossroad – taking right, you will walk into the better observed tunnels, but if you have time, turn left too.

If you are driving on a regional road from Vrhnika to Logatec, a turn on the right to reach the village of Zaplana will take you to the Mesec guesthouse, where you can park your car. Mesec guesthouse is actually the starting point of the round path, which takes you to the Rupnik line. The path mostly runs through the forest, is 3 kilometres long and is suitable for younger children too.

You will find several informative boards about the Rupnik line in English along the path, what is perfect for everyone interested into in this little known Slovenian history. The path takes you to some really nice examples of the bunkers. They are open for public and you can explore them from the inside freely. You will also find 5 energetic points along the route, which have health benefits for your inner organs like intestines, bile, thyroid, uterus, ovary, heart and lungs.

The Rupnik line has so far been one of the most amazing discoveries in Slovenia and I am still wondering how come it has not yet become one of the new Slovenian unique experiences from which so many new products could be made. But on the other hand, I am grateful that we can still find such unspoiled places and as much as this sounds strange, let’s hope it stays this way for years to come.