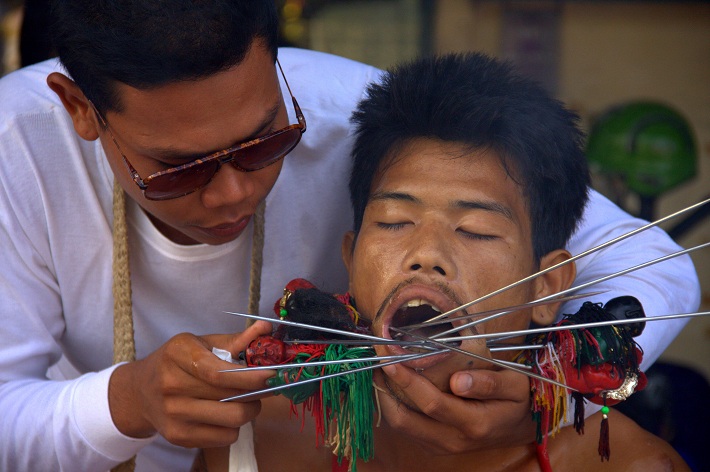 Vegetarian Festival Phuket in Thailand is one of the most bizarre festivals in the world! It is shocking, unusual, scary, but so different from anything else you have ever seen, it is definitely a great reason to visit Phuket in Thailand!

It is hard to believe that we can find unique things in some of the most touristic destinations. I was absolutely blown away, when finding out that even Thailand has something so fascinating, which not many people know about – in fact, this can be found on one of the most visited islands in the country – Phuket. 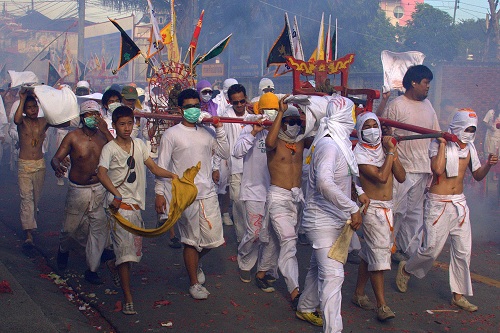 Even though Phuket is a relatively small island, it still gets more than 5 million visitors yearly. Due to the figures, we can easily say it is one of the most commercialized places in Thailand and there is nothing unknown, unique and fascinating there. But is this true? I can happily say NO, this is definitely not true for Phuket! Phuket is home to one of the world’s bizarrest, strangest, schockiest, craziest, unusual festivals you will ever be able to witness. I am talking about Vegetarian festival, which is hardly known among tourist and even travellers. Get yourself prepared for one of a kind experience! 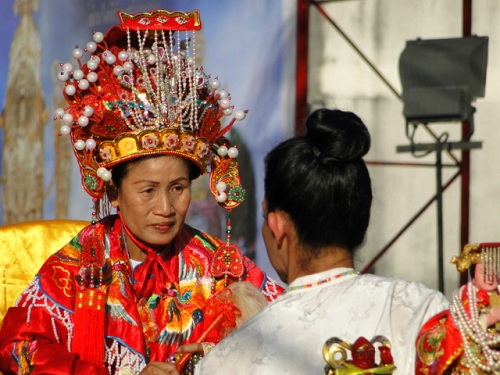 Vegetarian Festival Phuket is celebrated with the Chinese, who live in Phuket

Why to see Vegetarian festival in Phuket?

Once upon a time, or better said it all begun about 150 years ago, when a traveling Chinese opera group visited Phuket and got sick with malaria and some strange unknown diseases got the locals too. Lots of people, leaving in Phuket, originated from China, as in 18th Century, Chinese owned many tin mines there. The Chinese people were afraid that they insulted their Nine Emperor Gods and that is why they adopted a strict vegetarian diet and prayed to the Gods. That is also why the Vegetarian Festival is sometimes named as a Festival of the Nine Emperor Gods. The diseases miraculously disappeared and as an expression of joy, a big festival was held. From that year onwards, the Vegetarian festival has been held every year. 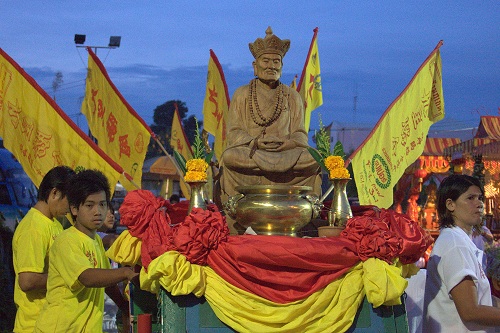 The Vegetarian started due to the Nine Emperor Gods 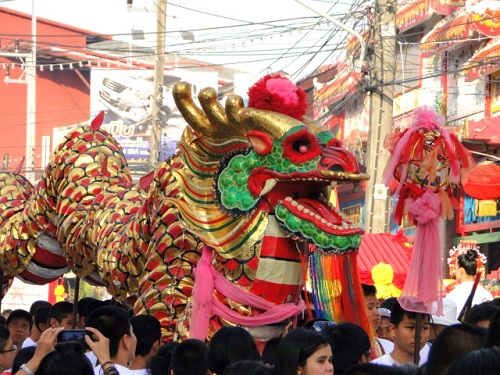 No Chinese festival can go by without a dragon mask, not even the Vegetarian Festival Phuket

What is Vegetarian festival nowadays?

The Vegetarian festival is known as one of the world’s bizarrest festivals. It last for 9 days and during that time different processions are held. The processions are all but normal and due to the sights, they might not be for everyone. The devotees who participate in the Vegetarian festival walk on burning coals, climb barefoot up the razor-sharp sword blades ladders and pierce various parts of their bodies with a variety of objects, where only their imaginations is the biggest obstacle. The chosen ones (spirit mediums, known as »mah song«) walk around the town in organized processions and not only they are pierced, they have to bear with large number of firecrackers, which people throw in them. 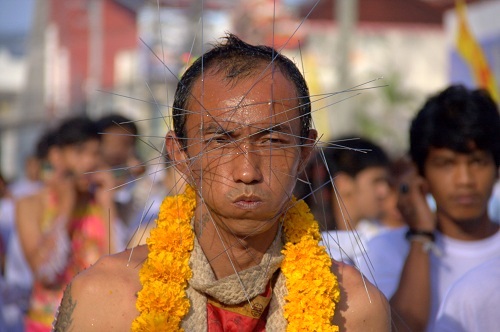 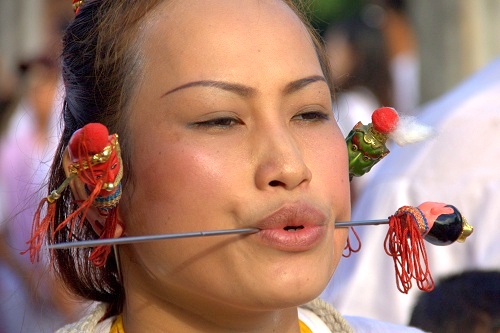 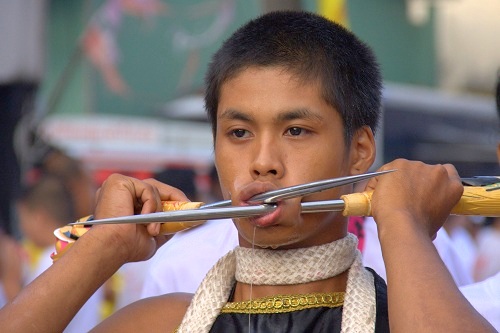 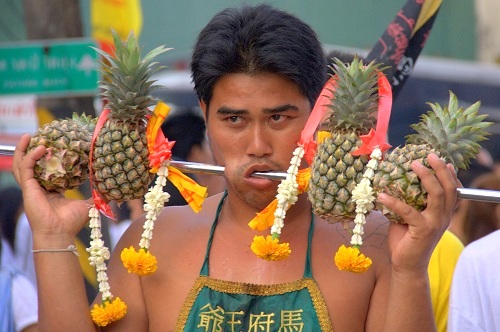 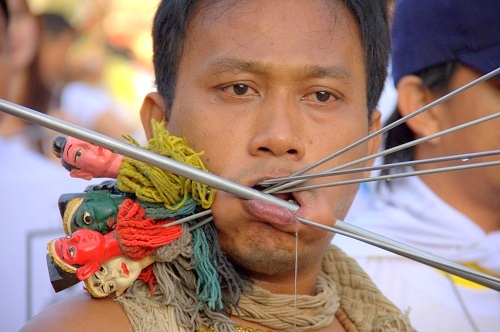 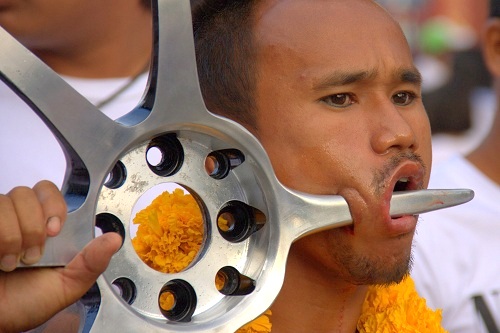 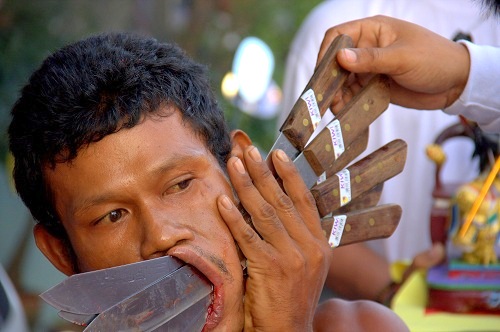 When and where in Phuket is the Vegetarian festival held?

The Vegetarian festival is held in the Old Town of Phuket and its streets and Chinese temples (clearly marked with yellow flags). Surprisingly hardly any visitor knows about it – looks like the word about it does not reach the Phuket’s sandy beaches and that makes everything even so much better! No tourists, no groups, just you and the locals – perfect and uncommercialized.
The Vegetarian Festival is held on the ninth lunar month of Chinese calendar, so each year this comes on a different date, but it is around the second half of the October. 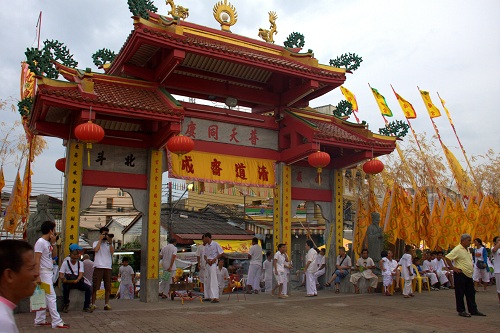 The Vegetarian Festival is held in the Old Town of Phuket at the Chinese temples and streets, marked with yellow flags 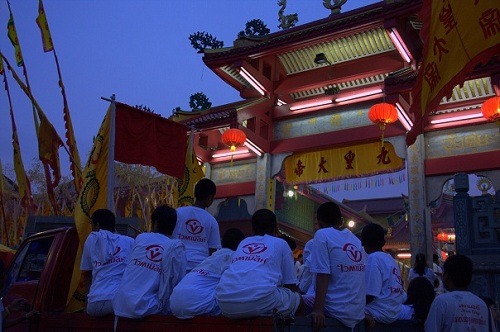 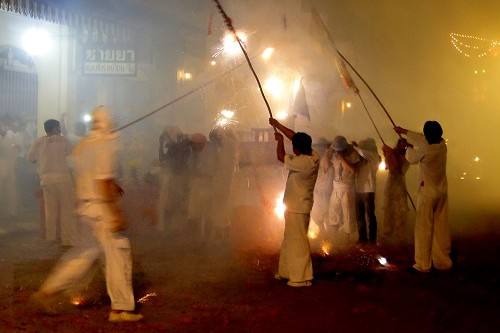 Accommodation during the festival?

The processions during the Vegetarian Festival begin in the early morning or late evening, so I recommend you to have your room somewhere around the Old Phuket town. 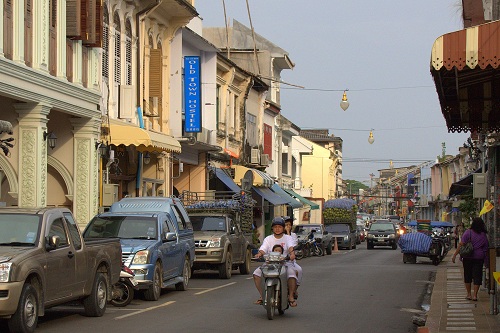 Simon and I stayed at the Phuket Old Town Hostel, which lies in the middle of the happening. One of processions on Vegetarian Festival pass this hostel directly. Our room was a very basic one, without a window, but it did have its own bathroom and was clean. It cost us 15 EUR/night (19 USD). If you travel solo, they also offer bunk beds in a mixed dormitory, which costs 7€/night. The price includes a free WI-FI.

Food during the festival

I think you have guessed by now, that the food at the Vegetarian Festival is strictly vegetarian. There are numerous stands and the best idea is just to walk around them and see what you will have. The food is good and cheap. You can get a meal for less than 1 EUR (1,30 USD). 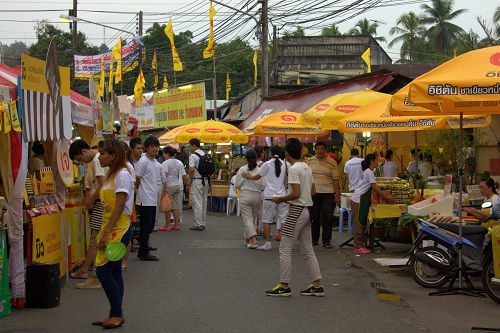 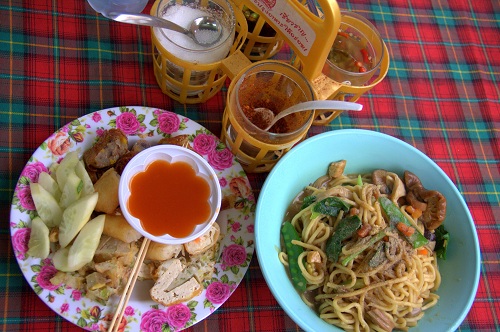 The food at Vegetarian Festival is good and cheap

How to reach Phuket and its Old Town, where Vegetarian Festival is held?

If you want to reach Phuket from Bangkok, the fastest and easiest is by a plane. We flown there with AirAsia Company and bought the tickets in advance, as they are cheaper that way. If you are lucky, you can fly to Phuket for about 20-25 EUR (25-32 USD). But be aware that the inner flights around Thailand depart from the domestic Airport Don Muang. You can reach Don Muang Airport easily with a shuttle bus from the International Suvarnabhumi airport.

You can fly to Phuket with AirAsia – budget flight airline 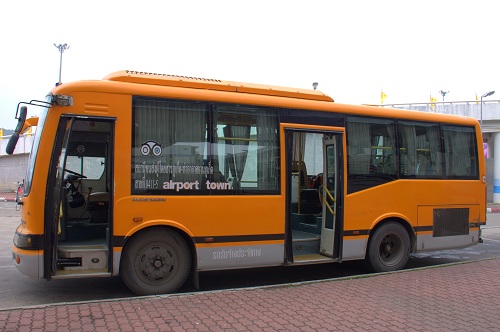 When you land at Phuket airport, the cheapest option for the Old Town is by public bus, which leaves from the airport terminal. It is extremely cheap (only 90 Bhat/pp) and takes about an hour.