16 best Tunisia tourist attractions, which should never be over-looked 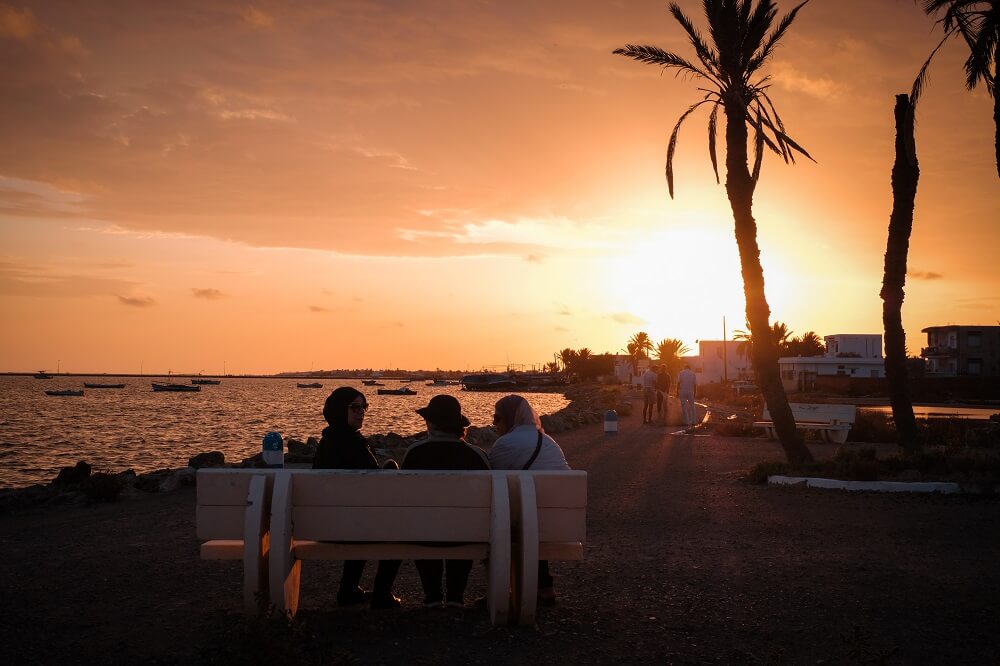 On the outskirt of Tunis, the capital of Tunisia, lies a small village known as Sidi Bou Said. Its white and blue look attracts many visitors and is known as one of the best Tunisia tourist attractions. If you don’t enjoy the crowds and want to have the picturesque streets (almost) all to yourself, be there early in the afternoon. Sidi Bou Said, with its artistic shops and souvenirs, sure feels a perfect place to find inspiration, so no wonder many artists live there. In fact, the village got its white-blue look in 1920 – due to the French painter and musicologist of Arab music, who lived there.

We would recommend you to hike up to Sidi Bou Said from its lower parking lot, along the local beach. You will be able to get some great views over the bay and its marina – not to mention some exercise too.

No matter which Arab country we explore, it is always fun to wander around the old town, behind the city walls. Medinas are like traveling back in time, with its smells, sounds and scenes, everything look so mystical. If you enjoy these kind of experiences, you really should not miss the Kairouan medina – after all, it is known as the most beautiful and best preserved medina in Tunisia. It is surrounded by the city walls, which is 3,5 kilometers long, and with many observation towers from 18th century too. The whole area of medina is also under Unesco World Heritage Protection list, so for sure a sight, which should get a place on your list of best Tunisia tourist attractions not to be missed.

Kaiouran might attracts majority of tourists due to its medina, but the fact is that Kairouan is the fourth most important city in the world for Muslims and also the most important one in North Africa. It is said that seven trips to the Grand Mosque in Kairouan are equal to one hajj to Mecca.

The magnificent Sahara, the world’s largest hot desert in the world, covers 9 million square kilometers, what makes it one third of complete African continent. Sahara desert is found in 10 countries and one of them is Tunisia too. Most of travelers to Tunisia just visit the outskirts of the desert, but if you have the guts or are traveling to Tunisia overland with your 4WD, like we did, don’t stop there. The Sahara adventure is one of a kind, unforgettable and so much more than words can even describe. We spent 5 days in the desert and even though not everything went smoothly, we went all the way to Ain Huilat Richet – so called Lost Lake. Amazing and one of the most adventerous Tunisia tourist attractions you can experience.

Set among numerous date palms for which Douz is known as the largest oasis in Tunisia and also as getaway into the Sahara desert. Douz is important for camels, which are part of a strong Saharan life tradition. If you have the chance to travel to Tunisia in December, make sure to be in Douz for its Sahara festival, perfect to learn more about local traditions and habits.

A small oasis, where around 50 nomad families live, has become perfect for tourists. The locals grow dates, own sheep and goats, but are also very tourist oriented, offering different kind of squad and camel tours on the outskirts of the oasis. We also find a natural pool with hot water in Ksar Ghiliane, which is perfect for a quick dip and also one of the most unique Tunisia tourist attractions. There is even a hotel in Ksar Ghiliane, which has a nice viewing tower over the oasis and Sahara desert, from which you can also spot Roman ruins of a formal fort.

In the heart of the Sahara desert (Tunisia tourist attractions)

If you are into trains and unique experiences, a ride with red lizard train deep into the Gorge Selja will for sure be on your bucket list of most amazing Tunisia tourist attractions. The ride is full of bridges and tunnels, which are unfortunately often damaged due to the rain. It was the same when we tried to visit it, but luckily we were there with Toyota Landcruisers and were able to ride on the railway by ourselves. Locals have a romantic story to tell, how the Gorge Selja was made.  There was a young boy and a girl, who were madly in love, but could not marry, because of their families. That is why they escaped and when they were looking for a perfect hideaway, the boy took his sword and hit the rock with all his power, so that they broke in half and the gorge was made, which was named after Selja – his girlfriend. The canyon Selja was once important due to phosphate mines.

What I love most about Tunisia tourist attractions, is the fact that they are extremely diverse. One of my favorite views were its mountain oasis. Even though this is also a desert, it is full of brown-green colors. One of the most beautiful and popular oasis to visit is Chebika. Make sure to walk all the way until the water spring and don’t’ even skip the abundant village on the left, before descending into the oasis. The village was greatly damaged due to heavy rains, but has now been restored.

If you are keen on Star Wars, you for sure know, that lots of scenes were shot right there in Tunisia. One of the most popular scenes to visit is the Mos Espa. Lots of tourists, but still fun to wander around.

Mountain oasis Chebika is worth the hike (Tunisia tourist attractions)

It is never really certain which oasis is bigger – Tozeur or Douz, but nevertheless, Tozeur is much more developed, modern and advanced city.  I guess that is also the main reason it is more popular among tourist groups, as it is always fun to have more tourist attractions in one place.

Driving across this vast white area looks a bit unreal. But due to the high temperatures and large vaporization, this is the largest salty desert in Sahara and also one of the most unique Tunisia tourist attractions.

If you have not heard for Kerkennah Island yet, don’t worry, not many did. This unspoiled and secret paradise is a true hidden gem. Forget about tourists and forget about hotel resorts, as you will find just few local guest houses there. Kerkennah Islands are an archipelago of 7 islands, but just two are inhabited. You can reach the islands by a ferry from Sfax and if you are looking for relax and peaceful vibe, small fishing villages and nice sandy beaches are the place to be. Make sure to indulge yourself with some fresh sea-food in one of the local restaurants. Kerkennah islands are for sure one of the most underrated Tunisia tourist attractions.

The old bus, left in the middle of the salt lake (Tunisia tourist attractions)

You will find a local market right next to the city walls and also inside of its 14th century medina. The atmosphere on the market is so lively and bright, you will not be able to avoid a shopping spree – luckily for us, we were there overlanding by our own car and had lots of space for that. Local market in Sfax is for sure one of the best in the country, so make sure to put it on your list of best Tunisia tourist attractions to visit and experience – I could wander around for days.

One of the best preserved Roman ruins can be found in Tunisia. The El Djem amphitheater is under Unesco World Heritage Protection and lies just 60 kilometers from Monastir, so make sure to climb on top, to enjoy the views from this magnificent structure. Spectacular!

Once a fishing harbor, Monastir is now a popular holiday-makers destination. The town is very nicely maintained. The old city center has several tourist attractions, which are worth taking time for. There’s even a nice local sandy beach.

If we talk about Tunisia tourist attractions, we cannot miss out the food. Tunisia is all about cuscus – cuscus with chicken, camel, lamb, fish… But wait, don’t give up too fast. Instead of cuscus (we are not big fans), you can also choose among pasta, rice and fries. If you just want a quick bite, a good and cheap street food option is shawarma. Once a popular street food was also brik, but unfortunately it is now available almost just as apetizer in restaurants. If you find yourself along the coast, you will be able to find amazing sea-food, most certanly as fresh daily catch. We have not find many desserts, so we went either for dates or Bambalounisom – popular donut alike sweet, which is extra popular in the white-blue village of Sidi Bou Said. Regarding drink, your best choice is mint tea or freshly squeezed juices (fruit depends of the season).

It might not look attractive, but let this not stop you in trying (Tunisia tourist attractions)

Along Tunisian coast, you will not miss when ordering sea-food (Tunisia tourist attractions)

Shawarma is a must street food (Tunisia tourist attractions)

You might never though that Tunisia is good for anything else, except holidays, but I am sure that these best Tunisia tourist attractions did convince you that the country is extremely diverse, interesting and a country, which should definitely get a place high on your travel bucket list.

Check out the most amazing tourist attractions in Tunisia in our video here.