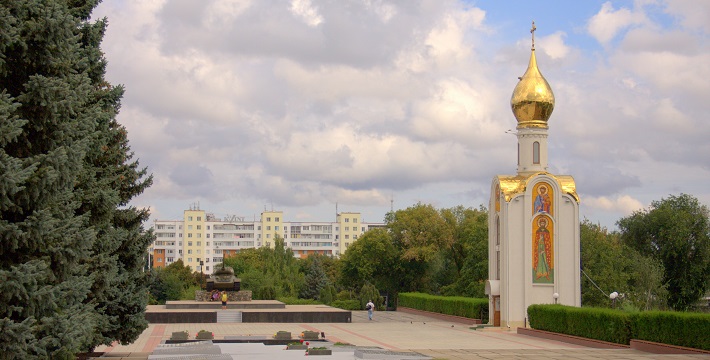 Transnistria Republic, which is also known as Pridnestrovian Moldovian Republic is a self-proclaimed country. If you want to feel the Sovient Union vibe and really travel off the beaten tourists paths, you should definitely stop at the Transnistria Republic.

When we decided to travel to Romania and Moldova, we were mostly wondering how Moldova will even look like. There was not much about Moldova we knew about. And to our surprise, there were hardly any tourist information about it on the internet or in any travel guide. Knowing that Moldova is known as the poorest (average monthly salary is 180 EUR) and the least visited European country, says it all. Funny enough, these two reasons were actually the prime reasons for which we have decided to travel to Moldova. 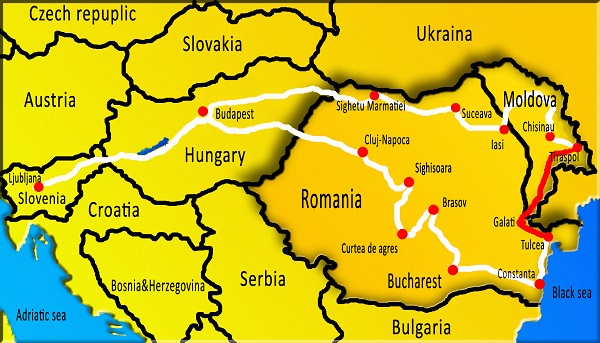 Travel map for Romania and Moldova

Exploring the Danube delta in Romania took us longer than first planned and instead of reaching Romanian-Moldovan boarder in the afternoon, we were there at dusk. We did not have any other choice than spending one more night in Romania. The town Galati lies just few miles from the border and even though there should be 2 camping places, we could not find any of them. Even locals did not know anything about them. We were too tired to be looking any further and rather focused on a place, which would be good to do a wilderness camping. We did find it and it sure was unique – we ended up at the truck parking place. I guess this happens, when you don’t want to spend money for the hotels. 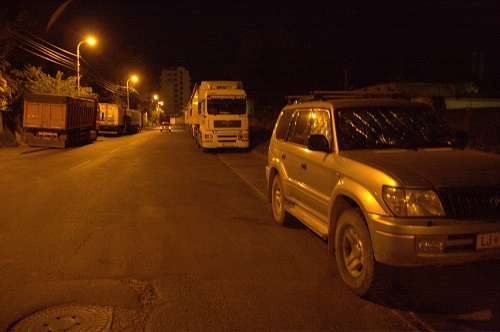 Staying a night in Gati, when traveling to Moldova and Transnistria

After a surprisingly good sleep, we started a new day early in the morning. Our plan was to reach the Romanian-Moldovan border, before truckers do. Even though we came early, we still could not avoid waiting in line. When it was finally our turn, we came across on a strict and firm check-up at the Moldovan side of the boarder. We had to present them car’s green card and show them the chassis number. Our passports were carefully looked at and so was the complete luggage in the car. Before leaving the boarder, we also had to buy a Moldovan vignette, for driving on their roads. At the end, being nice and patient, we were finally welcomed to Moldova. We even got a tourist map of Chisinau, what sure was a surprise. 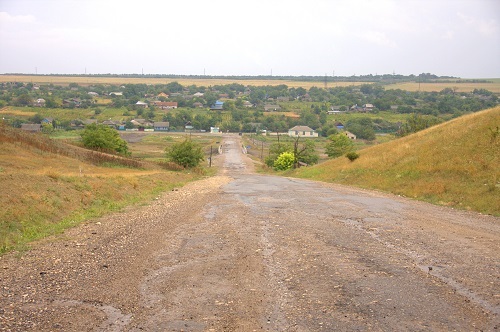 On our way to Transnistria, we had to deal with bad roads

We did not need to do a lot of driving around Moldova to realize how different the country is from Romania. Everything looked poorer, greyer and sad… I guess, one part for these feelings was rain. Puting the rain aside, we still can say that we found ourselves in a completely new world. The roads, with lots of pot-holes, were obviously in a very bad condition, what showed us again that Moldova is a poor European country. There were few more evidences that Moldova is not rolling in cash. One of eye-catching things were numerous car ramps, where vehicles can be maintained if in poor condition.  What in other words mean – very often. 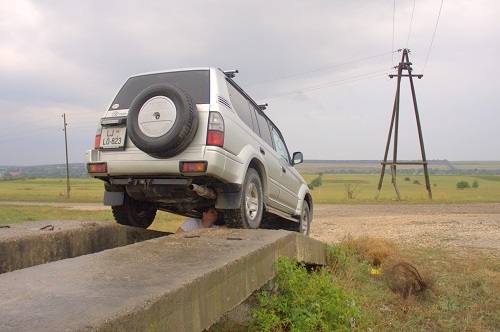 We did not take long, when we actually needed one of these ramps ourselves… Suddenly we heard a strong hit on the back of the car… The hitting noise came from the back and we feared for the worst… We drove to the ramp to check the rear right wheel, when we realised the shock absorber was partly broken. We could not do anything about it, as the only preparation would be changing the rear shock absorber, which was impossible. We had decided to continue our travel and hoping for the best… We were exactly in the middle of our journey. 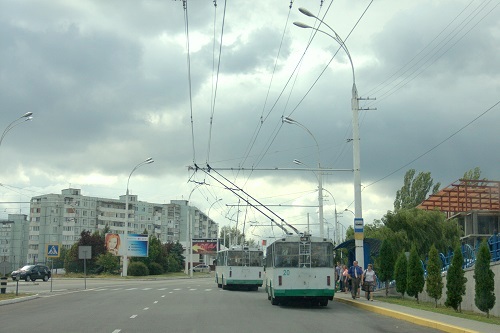 Our first stop when travelling around Moldova was a non recognised, or better said, self-proclaimed Transnistria Republic – some also know it under the name Pridnestrovian Moldovian Republic. Even though the Transnistria Republic has not been recognised by any of the world’s countries, it has been independent since 1992. Odd enough, when travelling to Transnistria, we needed to cross border and did the costume clearance for our car. 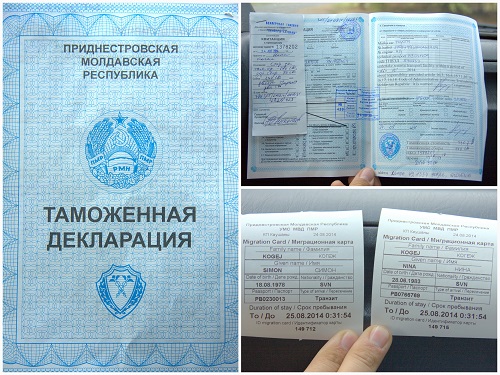 The bureaucracy took as two fat hours and our English knowledge hardly helped us. The language spoken here is Russian. We just hoped that they will not hear and notice our broken shock absorber, as we could have got problems. Luckily no one heard our marvellous new rhythm of the car. 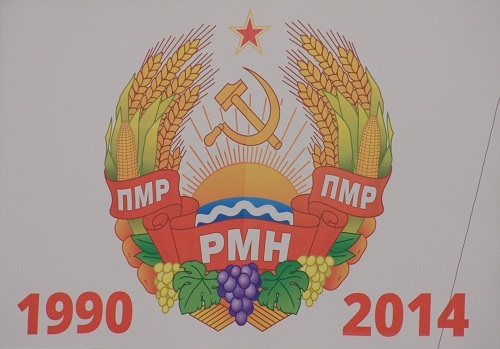 As soon as we reached a strict customs officer, we were faced with numerous questions in a bad, but typical Russian accent English: »Where are we from, where are we going, why are we travelling to Transnistria Republic… Do we have any drugs and weapons?« I was a bit terrified of the customs officer, but Simon was amused… I still don’t know how the heck he had the courage to answer on the last two questions, that we are travelling to Transnistria for the Rock’n’Roll… The costumes officer looked surprised and his answer was cold as ice: “There is no Rock’n’Roll in Tiraspol.” Luckily, he realised in few minutes, that Simon was making a joke, which he actually did get. If he would not got it, this innocent joke could cause new troubles. 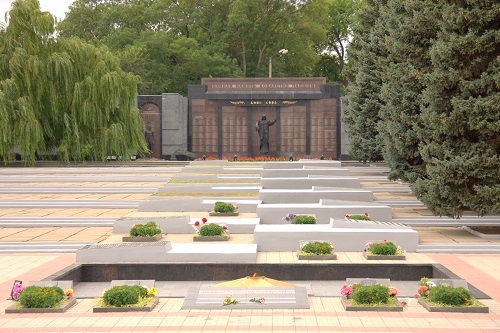 To enter the Transnistria we had to fill out a form for the car. It would be very easy, but the catch was, it was in Cyrillic alphabet. Luckily we are able to read it, but we don’t understand Russian, so this was another obstacle. At the end we managed to fill out the form with a help of the customs officer. 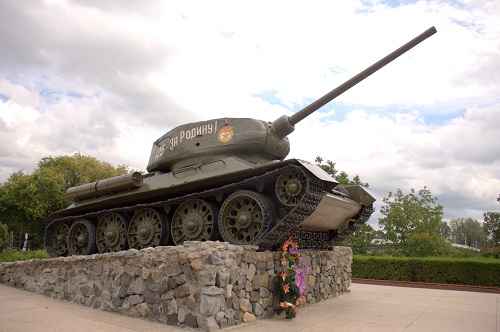 When the form was filled out we were appointed to migration office across the street. We had to apply for a permission to enter the Transnistria. The queue was long, so another 30 minutes went by. After getting permissions to enter, we needed to go back to the costume office, where one last thing was waiting on us – fee payment for the car. After the payment was done, we finally got the confirmation stamp and with that a green light to enter Transnistria. After these formalities were done, we started to chat with the customs officer. From the first strict impression, he was now a completely different person. At the end we shook hands and said goodbye. But just before we left his office, he wanted to make sure again, that we really understood, that there is no Rock’n’Roll in Tiraspol. 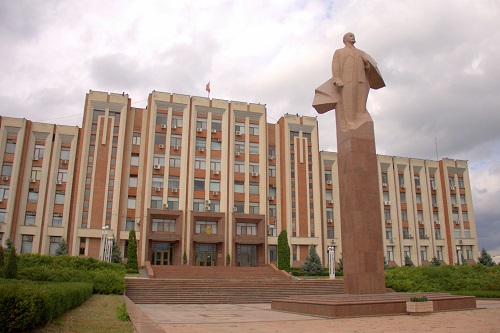 We travelled to Transnistria only for a few hours, as honestly there is not much to see there. The only reason why we wanted to visit it, was to feel the vibe of formal Soviet country. Tiraspol is mostly known for its large buildings and statues from the Communism era and Soviet Union time.  Tiraspol is like an open-air museum of that time. Some slow changes have been happening, but you don’t need to be an expert to feel and see the difference from the rest of Moldova.