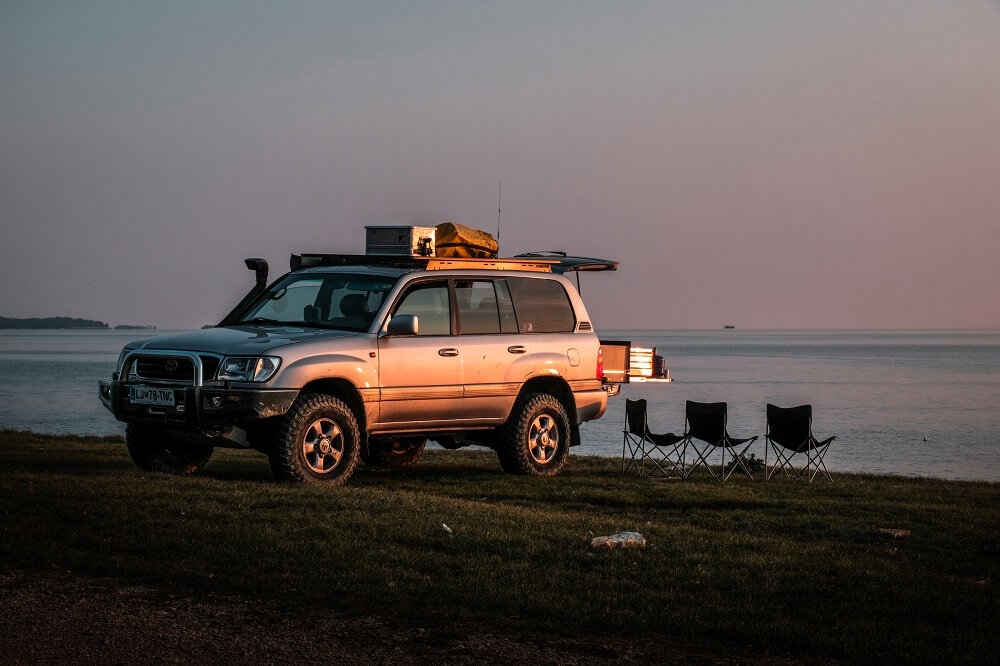 Converting Toyota Land Cruiser 100 to overland vehicle is quite a challenge and we have never thought that we will be working already on our third project before even writing about the second one.

I know that many of you are eager to follow how the conversion of Mercedes Sprinter 4×4 to a camper van will look like, but many of you have been asking us a lot about all the equipment and work we did on our Toyota Land Cruiser 100 too. So we finally took time and write the list of the work we did to convert Toyota Land Cruiser 100 for overlanding.

We wanted to lift up the car for a few more centimeters, so we installed the Old Man Emu shock absorbers and springs. That gave the car 5 more centimeters of height and adjustment for additional weight. Due to the lifted suspension, we needed to install longer and heavy duty rear sway bars, which our family company Prekom produced specially for us.

To protect the engine and suspension, we have decided for the Rival skid plates too. We are still planning to do the complete suspension restoration, including with powder blasting and coloring, to end with corrosion completely, but we want to end the Mercedes Sprinter 4×4 project first.

We bought Toyota LC100 in all the excitement, so we have not even properly check it out. When we parked it at home, we were starting to find out all its mistakes. The car was pretty rotten. We found several larger holes in the chassis, so there was not much to think about, except to renovate it completely. As we are not really home on this field, we took the car to a body shop mechanic, who did great job with all the holes, rust, protection. The car is in perfect condition now.

One of the first upgrades we did on the car were the tires. Our first Toyota Prado 95 had All Terrain tires on, but Simon decided to try the Mud Terrain tires from BF Goodrich on the LC100. Well, to be honest, he also prefers the look of them because of the rough profile.

Sooner or later it is wise to change the regular bumper to a stronger one, which can endure different and harder terrains. We have chosen the Sahara front bumper from ARB on the car.

Having a winch often seems like a totally unnecessary equipment, but even if you only need it once, it is worth every cent. The winch we have has synthetic rope, to make it lighter.

Our very first overland travel with LC100 was to the Sahara desert in Tunisia, so having a snorkel was one of the must things on the car. Snorkel is very useful also when crossing deeper rivers. There are many on the market, but we have decided for Safari snorkel, as they are much more durable and take hits better.

As we are sleeping inside of the car, we always need extra space for luggage and tools, which normally ends on the roof rack. Our roof rack was custom made by Slovenian company FabCore.

When doing longer overland trips, we always have at least 2 aluminum boxes on the roof rack.

Our ARB awning is perfect for hot summer days, but we have often use it as a rain protection too.

Some tracks are challenging, but worth the effort (Best things to do in Corsica)

Our last feature on the car was the LED-bar on the roof rack from ARB.

We changed our old Garmin navigation for its newest Overlander and we are very happy with its features. Apart from being able to upload tracks on it, we can of course make our own too, which are easily transferred on computer or tablet. It is also very practical that wilderness camping spots from several applications like iOverlander and Park4night are already marked, so we don’t need to separately check our mobile phones to find them. We also like the feature, where you enter height, width and weight of your vehicle and the navigation choose the correct roads for your measures, what will come handy with our 4×4 camper van too. Garmin Overlander has heat, dust and hits resistant housing. You can even connect it with the satellite, but you will need additional feature Garming In Reach for that to work. You can easily switch the navigation from standard to topographic maps when you are planning more adventurous off-roading.

Our Toyota Land Cruiser 100 has a sunroof too, which is perfect to have open during the hot summer nights. To avoid mosquito bites, we are covering it with the mosquito net.

As we were forced to remove all the interior because of the chassis renovation, we have done isolation on the floor and doors too. We used 5mm self-adhesive closed cell foam. In some parts we even put anti vibration pads.

The bed is folded on the kitchen drawers in the trunk, so we needed to find a simple way of making the bed every day. We used pull out steel sticks. The bed stretch to 190 x 155 cm. We sleep on 6mm foam, which is very comfortable.

First, we did not plan any drawers in the trunk, but having things in boxes, which we always needed to put in and out, was so frustrating. Simon decided to do two pull out drawers. One drawer is for the kitchen and the other is for the fridge, Lifesaver and clothes. Each of us have its own clothes organizers/bags in its own color, so we know exactly where is something for me, Simon and Ren. I ordered the organizers at Alibaba.

Our pull out drawers have locks – Simon bought the cradles at Aliexpress, as they were much cheaper than in the official stores. So far they are working well. We have also installed a pull out counter, where we normally cook and prepare meals.

Having a place for water is crucial for overland traveling and we have the water storage in a special jerry can – Lifesaver. This amazing product has a filter, because of which a dirty mud can become drinkable water without even boiling it. I also love that ever since we have it, we have not yet bought water in a plastic bottle. Oh, and the Lifesaver can be a shower to, what is very practical. I have written a longer review for the Lifesaver on the blog – check it out here.

The small camping gas is just too small to take it on longer journeys and that is why we have bought a larger gas storage, which can be filled everywhere. We have even bought a two burners stove, what did make our life so much easier on the road. Now we can prepare a good cooked meal much faster than before, when we only had one burner. We are using the Tupike stove by Primus and we were mostly convinced over for quick water boiling time, wind protection shields and the fact that it can easily be cleaned and stored, but is still compact. Apart from also looking nice, we also enjoy its small griddle plate, which we sometimes use for toasts and even meat. The stove has foldable legs, but we normally cook without them on our kitchen counter or table.

When we first started with overland traveling we were without a fridge, but now that we have one, this sure is one of the most amazing things in the car. Can you imagine anything better than sipping a cold beer in the middle of a desert or on a sandy beach during the summer? Not to mention we can stock up with meat for days, without worrying something will go bad. We have bought used Indel compressor fridge few years back and still works fine. It shuts off when battery is low.

We started with plastic plates and cups, but it was not long before we realized we cannot really wash them properly with cold water. Greasy dishes needs hot water and in most cases we don’t have it. So the best possible decision is to stock yourself up with stainless steel plates and cups. We have bought ours from Primus – the dishes, plates, mugs, cutlery.

This year’s addition is also cast iron pan, which first our friends had and we used it all the time on an open fire when wilderness camping together. A really nice cast iron equipment to every overland car is also the ARB toaster in which even waffles can be made.

Our first chairs and table were from Brunner and we are still using them after almost a decade. They are comfy, look good and in our case, last long too. We only changed the model now that we are three due to the limited space in the car, but that’s it. We also love their new aluminum table, which folds quickly, what makes it very practicle.

The cost of overland vehicle conversion

If you have ever been doing a conversion of a vehicle or maybe did renovation of a vintage car, you know that this kind of fun is not cheap. In fact, for many it is priceless and it is hard to put a price tag on it, as you will also invest many hours into the project.

We paid 9.000 EUR for Toyota Land Cruiser 100, which was in a pretty bad condition. And to do all the renovation and upgrades, we have spent another 10K+ on it – our working hours are not included.

I know, crazy figures and we could be making many travels with this kind of money, but for us nothing can really bit being off-grid, overlanding and getting to know the real world.

I hope this post will help you with your own plans, your own car conversions to overland vehicle. We have learned many things from our first two project, which will come in use on our third one for sure – the most complex, nerve-racking and expensive too.