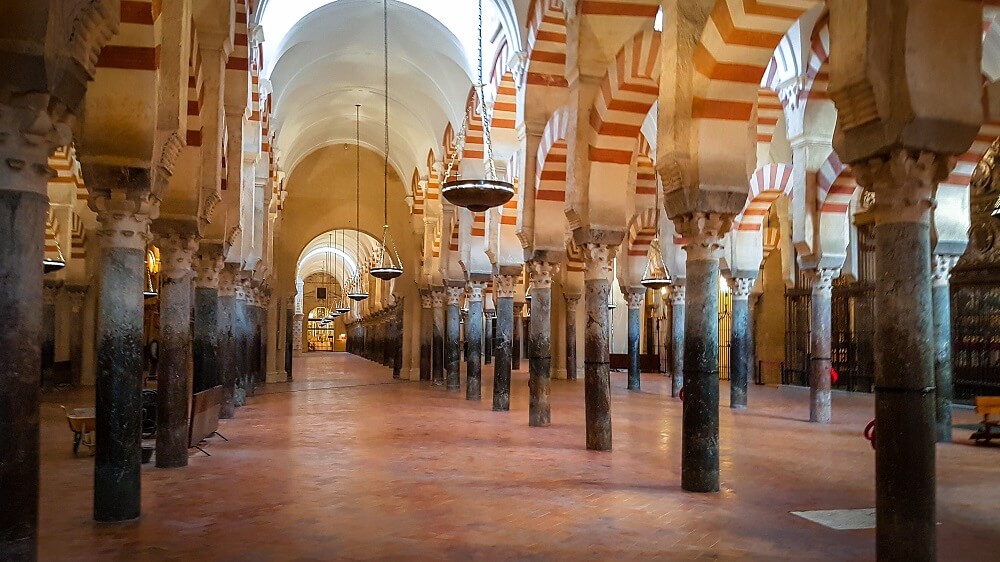 Some of the best tourist attractions in Cordoba can easily show, how rich and important the city once was. Thousand years ago Cordoba was the largest city in the world, which had three times larger population than Cordoba has it now.

Tourist attractions in Cordoba are a mixture of different kind of cultures and nations. In Middle Ages Cordoba was the Islamic center, before that the Romans did leave a lot of influence here too.

Among all of the tourist attractions in Cordoba, the Mezquita mosque, now the cathedral, is for sure the one everyone should visit. The mosque was built in 8th-9th century, but it came under the Catholic rule in 13th century – first as a catholic temple and in 16th century as the cathedral. It is mostly known for its gorgeous red-white pillars, which were preserved from the original mosque.

Not far from the cathedral, we can find another popular tourist attraction in Cordoba, which originate from the Roman times. The old Roman bridge has been connected the banks of the Guadalquivir River ever since the 1st century, but nowadays it has a Middle Ages look. It is said that the best time to see it, is during the sunset, when it gets the golden look.

This vast complex, which was first the Visigoths fort and was later under the Umayyad Calafat rule, is one of a kind tourist attraction in Cordoba. After the Islamic rule, the Alcazar de los Reyes Cristianos was richened with numerous gardens, courtyards and the largest library in Western Europe. The complex was once the Royal Palace, later the Palace of Christian kings and with that also seat of inquisition for three centuries. We can also find the Royal stables along it, where Andalusian horses were breaded.

Inside of the mosque / cathedral (Best tourist attractions in Cordoba)

Tourist attractions in Cordoba are not far from each other and one of the best ones to wander around is the Jewish quarter. You will easily recognize it for its narrow zig-zagging streets, among which the Calleja de las Flores (Flower Street) is the most famous of them all.

Jews were exiled from Spain at the end of 15th century, but luckily few Jewish monuments were still saved from destruction – one of three synagogues, which still are preserved in Spain, can be found here in Cordoba. The synagogue in Cordoba was built in 14th century and had several roles after the expulsion – it was first a hospital, later school and from the end of 19th century, it has been proclaimed as the National Museum.

An interesting thing to do in Jewish quarter is also a visit to the Zoco where artistic studios and workshops can be found.

One of the best tourist attractions in Cordoba is also the old city wall, which originates from Roman times. Out of 13 gates, 3 of them are still preserved, including few defense towers and palaces.

On the outskirts of Cordoba, we can find archeological site of Medina Azahara, which was, apart of Alhambra in Grenada, one of the architectural Spanish-Islamic gems. Construction of Medina Alzahara needed 25 years and should be the central of Calafat, but at the end it only had its function for 65 years, before the Northern African Berbers reached the city. Now the Medina Azahara is renovated and it looks magnificent once again.

Hotel recommendation: Hotel Riviera – A budget hotel, which is clean, has great location and is in walking distance to all the major tourist attractions in Cordoba and its railway station. More reviews and photos here.

Tourist attractions in Cordoba are of course much more than the six tourist attractions listed on our list. You can learn more about the Cordoba’s history in their numerous museums (one of the best two are archeological and ethnographical), interesting bull fighting arena, beautiful exotic parks and gardens (Jardin de Juan Carlos, Jardin de Colon, Jardines Duque de Rivas) or with a walk along the Guadalquivir River with observing the old water mills from the Moor era.

Tourist attractions in Cordoba are magnificent and the city should with no doubt get on your bucket list during the Andalusia travel. To have enough time to see them all, make sure to have at least 2-3 days for the city.