13 TOP rated things to do in Corsica, which you just cannot miss 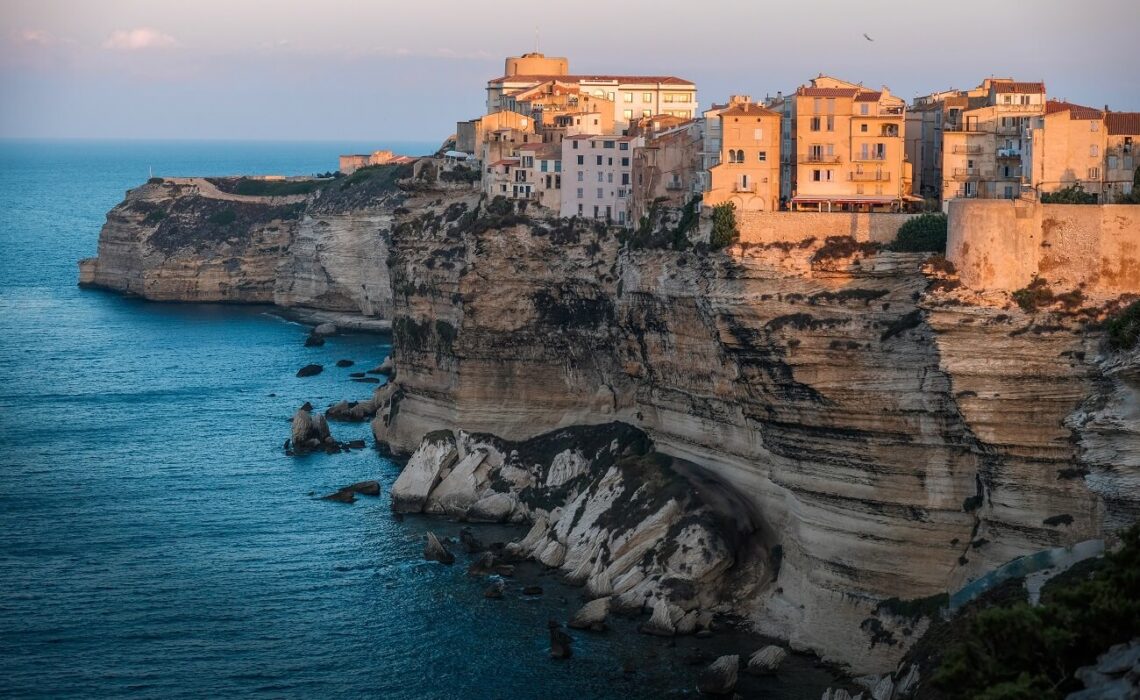 TOP rated things to do in Corsica

Relax at its Beaches

I know, it does sounds as a cliché, but one of the most popular things to do in Corsica for most is visiting its beaches. Corsica is indeed a great summer destination – with its 1000 kilometers of coast some of its beaches are so amazing you can also find them on the list of best beaches in Europe and in even the world. If you don’t mind the crowds, make sure to visit Palombaggia, Santa Giulia, Pinarella, Bodri, Rondinara, Roccapina. But if you want to enjoy some peace and quiet, go for less popular beaches. They might not be as picturesque as the most popular ones, but they are still a very nice alternative.

Admire the sunrise at Bonifacio

You will find several cities in Corsica (Ajaccio, Calvi, Bastia, Porto Vecchio), but one of the must things to do in Corsica is with no doubt visiting Bonifacio. The citadel, set up on the 70 meters high cliff is magnificent, especially if you get up early to enjoy the sunrise without waiting in line to get the best views. Hiking down the lighthouse you can even spot Sardinia.

Amazing Bonifacio (Best things to do in Corsica)

Marina in Bonifacio (Best things to do in Corsica)

Citadel in Bonifacio (Best things to do in Corsica)

Hiking on the GR20

Corsica is known as the most mountainous island in the Mediterranean due to volcanic origin. The island has 20 peaks which go over 2000 meters of altitude, so no surprise hiking is one of the things for which many travel to Corsica too. In fact, you will find one of the most spectacular and beautiful hiking trails in Europe in Corsica – GR20. The hiking trail is more than 200 kilometers long and will reward you with stunning views – including to a popular hiking spot Lake Melu and Lake Capitellu.

Hike up the Lake Melu (Best things to do in Corsica)

Get to know the history in Filitosa

At the first glimpse Corsica might only be a good outdoor destination, but you will also find the best observe Neolithic site in Europe there – Filitosa from 5 thousand years B.C. Most people decide to visit Filitosa, but there are many more sites with menhirs and dolmens on the island too. One of the best preserved dolmen in Corsica is the Dolmen de Funtanaccia, build from 6 meters high blocks and a stone roof.

Apart from Filitosa, Corsica has many other menhirs sites (Best things to do in Corsica)

A boat trip to Lavezzi islands

The Lavezzi islands are declared as a national park, and are just a short boat ride away from Bonifacio. You will be stunned by all the picturesque bays and turquoise waters.

Wander around the picturesque villages

The cities in Corsica are nice, but if you are looking for a more relaxed vibe and picturesque motives, make sure to wander around some villages. Exploring the villages was in fact one of my favourite things to do in Corsica. The streets with their stone houses, flower bushes, shops, restaurants and cafes are so tempting to walk on, that you will not want to leave. You will find 365 villages in Corsica, one for each day of the year. Some of the most beautiful villages in Corsica are Ota, Nonza, Porto, Sartene, Ghiosi, Piana, Evia, Tollare, Centuri. Don’t even forget about Corte.

I love the sea, but when we were in Corsica, I could not wait to return back to the mountains, find a natural pool to swim in and be surrounded by lush green nature. One of the best things in Corsica is exploring the mountains too. We really enjoyed the Asco and Restonica gorges and swimming in the natural pools just underneath the hiking path up the Lake Melu. A very picturesque place to swim is also at the old Albertacce Bridge. You can also find a nice place with warm water at Piscine de Cavu. You can enjoy a nice waterfalls Ghjaddu near the dam Barrage de l’Ospedale.

There is no Corsica without its amazing views, so make sure you put gazing from one of the peaks high on your bucket list of best things to do in Corsica. Corsica is an island with narrow and zig-zagging roads, which will for many be a thrill ride, but at the same time and due to amazing views, very rewarding too. Don’t travel home from Corsica without driving over at least one mountain pass – some ideas; Col de Vergio, Col di Illarata, Col de la Vaccia, Col de San Petru, Bocca di Baveda. You can upgrade some mountain passes with plateaus too – we have visited two; Plateau de Gjuverino and Plateau du Cuscionu, which are perfect for hiking and to see a completely new side of Corsica.

Col Saint Jean (Best things to do in Corsica)

Bocca di Baveda (Best things to do in Corsica)

Get a photo of the pigs

One of the cutes things to do in Corsica is watching the pigs, running freely around the inner part of the island. They are not afraid of people at all and will for sure be one of your unique experiences in Corsica. 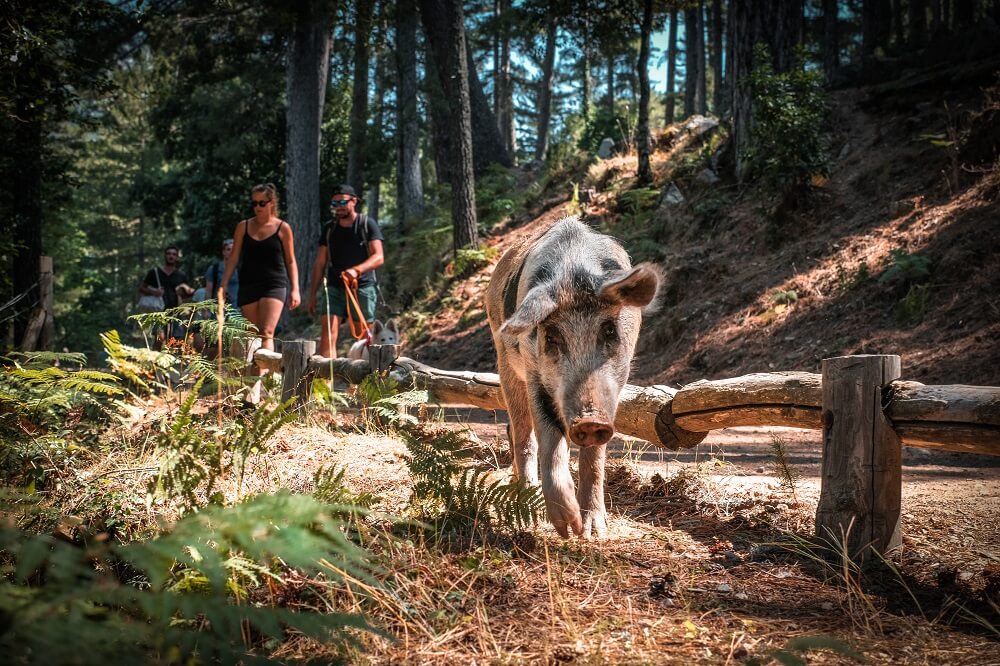 Get a taste of Corsica

French food is known all over the world and you will not stay hungry in Corsica either. Corsica is known for its cheese, wine, beer and meat. Their local beef, pork and lamb is amazing and make sure to taste some while you are exploring the mountain villages. If you are keener on fish and sea food, you will not be disappointed when ordering some at the local restaurants along the coast. But one of the must things to do in Corsica is to try is the wild boar – stews, salamis, and pate.

Local cheese, salami and pate (Best things to do in Corsica)

Local beef T-bone – yummy (Best things to do in Corsica)

If you will be visiting the north peninsula (Cap Corse), which I sure recommend, you will be able to see many old defense towers. They originate from the Genovese Republic, which were built to protect the island against the barber pirates.

Take in the sunset at the Les Calangues

The landscape in Corsica is extremely diverse, but the Les Calangues deserves its own attention without a doubt. A drive on the zig-zagging road, right through the red granite rocks and its formations is stunning. To be there at sunset, when the rocks look like they are glowing, is a true magic.

Stunning Les Calangues (Best things to do in Corsica)

Driving around Les Calangues is already amazing, catching the landscape in sunset is magical (Best things to do in Corsica)

Get some off-road adrenalin

If you enjoy adrenalin and even if you will not travel to Corsica with a 4WD, you might want to take a tour with one. Corsica is wild and is very well known among off-road fans as the perfect destination to show your skills. There are tours taking you to three remote beaches, which can only be reached by 4WD – Saleccia, Lotu and Ghignu. If you are traveling to Corsica with your own 4WD and will not tick off the Piste des Seigneurs, you will lose your respect among many off-road drivers.

Piste des Seigneurs (Best things to do in Corsica)

Some tracks are challenging, but worth the effort (Best things to do in Corsica)

Corsica has charmed us with its views, off the grid paths, natural pools, villages and wilderness. There are so many diverse things to do in Corsica, that our best advice to give is, not to be in a hurry and really take enough time for this island of beauty.

Check out our Corsica travel guide to get more practical information.

Video – Best things to do in Corsica and our overland travel