Most amazing things to do in Suzhou, China 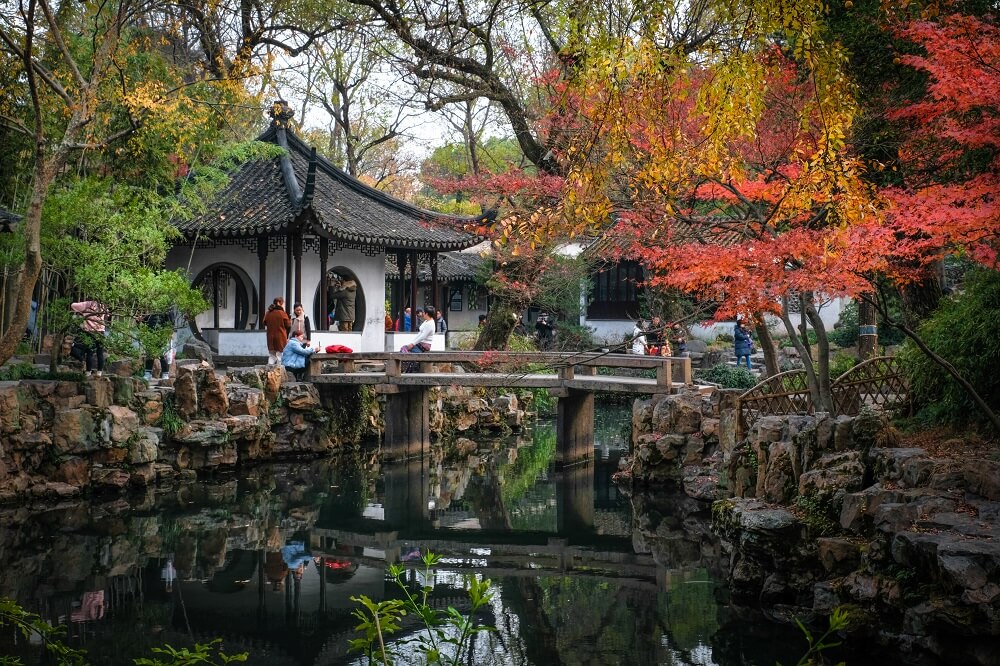 Things to do in Suzhou are so amazing, that Simon and I both fallen in love with the city. Even we had only one full day to explore it, we would not mind to stay in Suzhou for one or two extra days.

Suzhou was established in 6th century and one of the best things to do in Suzhou is for sure visiting its many gardens, for which we often hear that Suzhou is a garden city. In fact, due to all the amazing green areas, Suzhou can be find among 10 best cities in China to visit. But Suzhou is so much more than its gardens.

Amazing things to do in Suzhou

Relax at the Administration Garden

Suzhou has many traditional Chinese gardens, but the one, which gets most of the attetion is the Administration Garden. Visiting it, is for sure among best things to do in Suzhou, no matter the season. Well, it is very inviting and instagramable during the spring and autumn, but if you want to avoid crowds, the best time to enjoy it is during the winter, when it is off-season in Suzhou. The Administration Garden was built in 1509 and spreads over 52.000 square meters. With its pavilions, lake and numerous paths, it does look like from a fairy-tale. I could easily spend several hours there, just walking and admiring it.

Walk along the water canals

If you enjoy Venice in Italy, you will love the fact that Suzhou is known as the Venice of the East. Due to its numerous canals, 42% of the city is covered with water. One of the best things in Suzhou is either walking along them (especially the Pingjiang Road) or rent a boat for a bit different feel and views.

Water canals (Things to do in Suzhou, China)

Taking a boat ride (Things to do in Suzhou, China)

Administration Garden (Things to do in Suzhou, China)

Enjoy a cup of tea on Pingjiang Road

Pingjiang Road is one of the most popular streets in the old city and with that, a walk along it can easily be listed as one of the best things to do in Suzhou. The road is full of cafés, tea-houses and traditional restaurants, small shops. Make sure to take enough time to explore it.

Shop until you drop at Guan Qiam Street

In the middle of the old town you will also find a pedestrian street Guan Qiam, which is popular place with tourists and locals. There are shops everywhere – from low-end to luxury brands, so if you like shopping, a visit of this place is one of the best things to do in Suzhou.

Learn about silk production in the Silk Museum

Suzhou was the capital of silk for centuries. In fact, the city had silk monopole until the Byzantine’s smuggled few silkworms from the country. We can now find a beautiful Silk Museum in Suzhou. To learn more about silk tradition, visiting the museum is for sure one of the best things to do in Suzhou. And guess what, the museum is free of charge.

Beautiful silk museum (Things to do in Suzhou, China)

In front of the silk museum (Things to do in Suzhou, China)

Pedestrian and shopping paradise (Things to do in Suzhou, China)

Get to know the history in the City Museum

If you are into history, you for sure have to visit the City Museum in Suzhou. You will find more than 15.000 ancient artifacts, traditional Chinese paintings and handcrafts there. The City Museum is also free of charge, what makes it for sure one of the best budget things to do in Suzhou.

If once China was all about bikes, you are too late for that, as the bicycles are replaced by electric scooters. But you can still have the experience and taking the rickshaw ride in the old town, what is one of the unique things to do in Suzhou, just don’t forget to bargain for the price before taking the ride.

This amazing 75 meters high, 9 storey pagoda was changing through centuries – being upgraded and renovated. But the building we see today is more than 170 years old. North Temple Pagoda is so high you cannot miss it. If you will be visiting the Silk Museum, you can find it just across the street. The whole area of pagoda is magical – so peaceful, but still powerful. If you are lucky enough you will also be witness of the group prayer in front of the temple behind the tower. I got goosebumps when listening to the mutterings of the praying songs. Just standing, observing and listening was with no doubt one of the most powerful things to do in Suzhou.

Be wowed by the Taoist gods in the Xuanmiao temple

Visiting Suzhou, you cannot leave behind a visit to the Taoist temple Xuanmiao. I was overwhelmed over the magnificent six Taoist gods. The Xuanmiao temple is one of the most important tourist attractions, also because it has the state cultural recognition. It was built 276 AN and a walk through it should be on your bucket list of best things to do in Suzhou with no doubt. You can find the temple on Guan Qiam pedestrian zone.

North Temple Pagoda (Things to do in Suzhou, China)

Xuanmiao taoist temple (Things to do in Suzhou, China)

Xuanmiao taoist temple (Things to do in Suzhou, China)

Where to sleep in Suzhou?

We would recommend to stay in the Hotel Soul Suzhou, which is just steps away from the pedestrian street Guan Qiam and the amazing Taoist Xuanmiao temple. You will also be able to reach the other tourist attractions and things to do in Suzhou on foot from there. The hotel offers good buffet breakfast with Chinese and some European dishes. The rooms are big and clean. Hotel Soul Suzhou can be reached on foot from the railway station or you can take the taxi.

How to reach Suzhou?

The best way to reach Suzhou is by bullet train. But note that Suzhou has two railway station – North Suzhou and Suzhou. You should get off at Suzhou for reaching the old town. You will need less than 30 minutes by bullet train from Shanghai, as the train reaches up to 245 km/h. You can buy the train ticket at the railway station, what can often be tricky, as almost no-one speaks English, or you buy it in advance and you go to the ticket counter/office to hold it up. In that case you will need your passport.

Rickshaw ride (Things to do in Suzhou, China)

Suzhou is best known for its beautiful gardens, so the best time to see them in all the glory is during spring or autumn. But be aware – most visitors think exactly like that, so the hotels and even entrance tickets increase in price in high season. If you want to avoid higher prices and crowds, the best time for all the things to do in Suzhou is during the winter months – it is said December is the best.

We were both extremely impressed over Suzhou and its things to do. If we compare it with Shanghai, Suzhou is smaller, more traditional and much more pleasant to wander around. During the Han dynasty, Suzhou was once 10th largest cities in the world. The population of the city is now “only” 4 million (10,5 million with surrounding), but because of all the things to do in Suzhou, its tourist attractions and rich history, the city still looks mighty powerful now too.