Svaneti Georgia – amazing in every way! 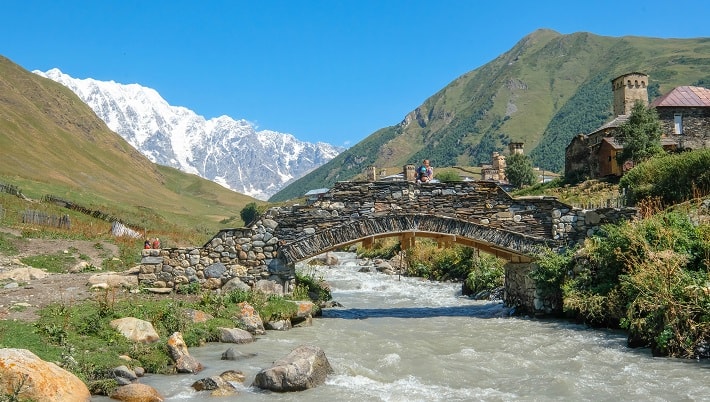 Svaneti Gorgia region was once known as being a dangerous place and being mugged was nothing special, but lucky for us, it is completely different now. With a clean-up campaign by President Saakashvili and investments in tourism the Svaneti region has been getting more and more popular tourist attraction in Georgia.

Why you should not miss traveling to Svaneti Georgia?

Mestia is somehow a capital of Svaneti region. Everything begins and ends here. With its altitude of 1.470 meters it is a great base for hiking. The main street and the square might look like a Caucasus Switzerland, but just steps away from the hustle and bustle, you find yourself on the muddy streets with pigs wandering around and hearing kids laughter, who luckily have not been spoilt by tourism yet. 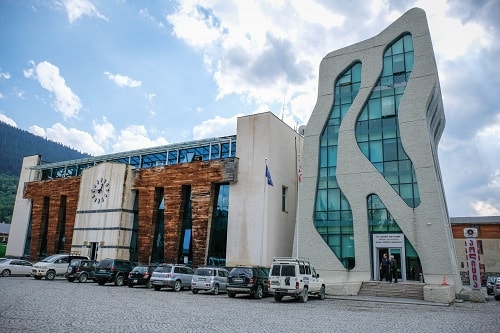 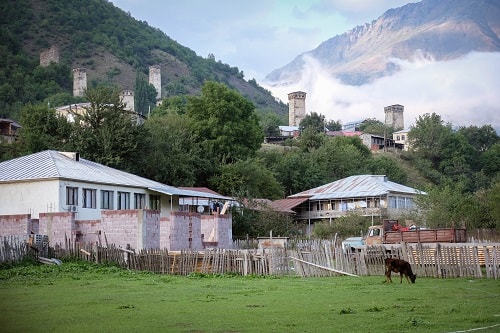 Svaneti can be named as hiking paradise. It does not offer just amazing hiking trails, fantastic views and landscape, but also lots of glaciers, which can be visited. 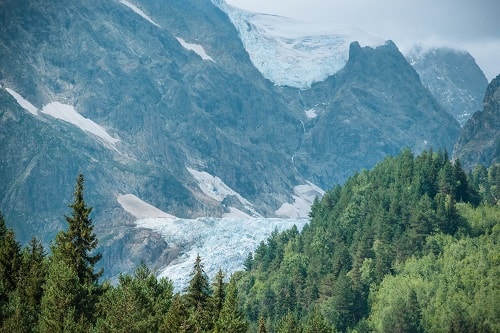 Chaaladi glacier – the most popular hike in Svaneti (Svaneti Georgia) 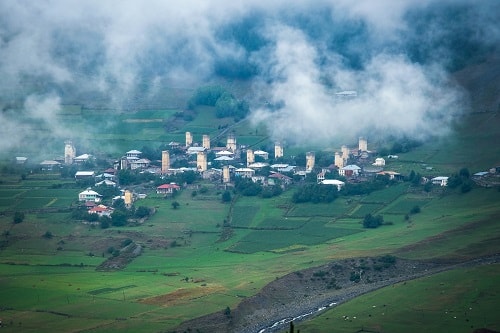 The Svan towers are unique structures in the world (Svaneti Georgia)

If the Svan towers already charmed you in Mestia, the views on them in Ushguli will blow your mind. The Svan towers were once used as defense towers for locals. To be exact these were actually fortified houses, from which local warriors defended their land and families. It is said that the oldest dated in 6th century.

Zig-zag roads and lots of high mountain passes are perfect for cyclists with prime shape. If you are more into mountain-biking, Svaneti is definitely the place to be. There are loads of trails which will take your breath away due to scenic nature and difficulties. 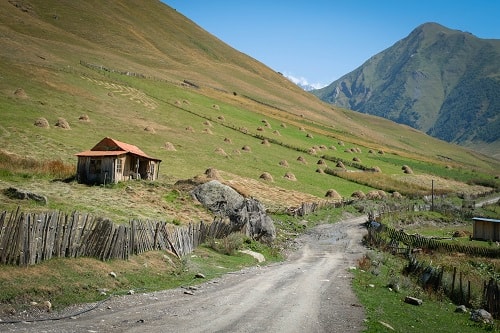 Far away villages are perfect for mountain-biking (Svaneti Georgia)

You can visit Ushguli either on foot (you will need around 4 days of hiking – sleeping can be done as wilderness camping or you can stay in local guest houses in the villages along the way) either by car, where 4WD is still recommended. You can fetch a 4WD from the main square in Mestia. 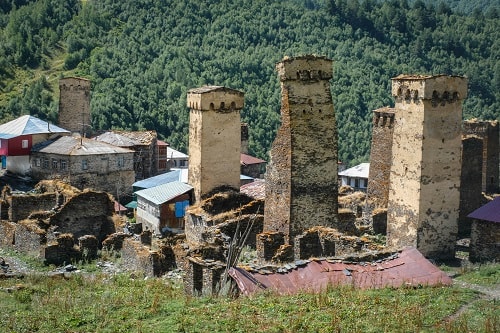 We traveled to Mestia by our own 4WD and needed around 2.5 hours for 50 kilometers. The road is in bad shape and muddy, but a new, wider and better road is being built and in few years Ushguli might be accessible even by buses. Make sure to visit it before this place becomes too touristy.

Ushguli is actually an area, covering 4 smaller villages, which lie at 2.200 meters above sea level. Old stone houses are surrounded by Caucasus snow covered mountain tops, what makes everything even more spectacular. To top it all off, add the unique Svan towers and you will never want to leave. 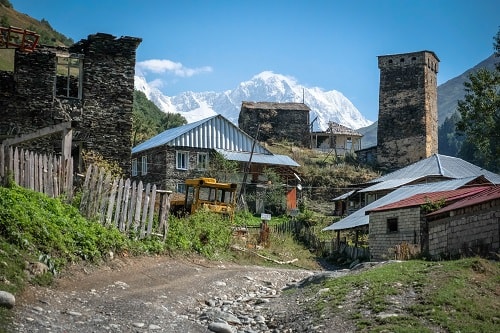 Ushguli is also a great place for hiking. We met people, who were so enthused over its lazy and slow vibe, pure nature and friendly people that they changed their planes and instead of exploring the whole Georgia, they spent all their travel time in Ushguli. 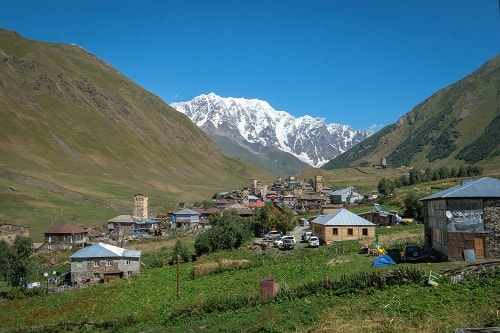 Ushguli is so unique that it is even UNESCO World heritage site. It is claimed that Ushguli is Europe’s highest permanently inhabited settlement. If you already made it to Mestia, don’t even think of skipping Ushguli. 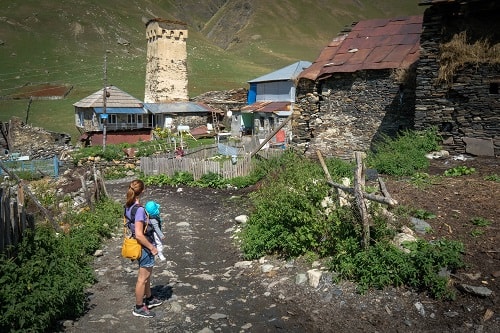 One of the best things to be visiting Georgia with your own 4WD is a drive over the Zagar Pass at the altitude of 2.623 meters. The drive was not easy as we needed the whole day for it, but we did not have any regrets. In fact, this was actually one of the best rides during our overland travel across Turkey, Georgia and Armenia. 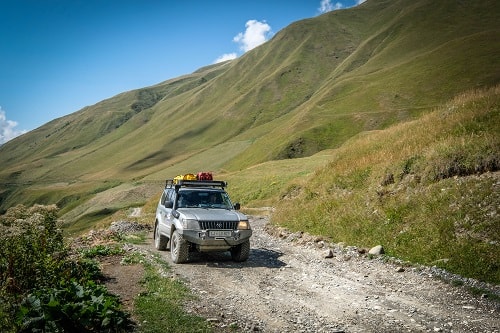 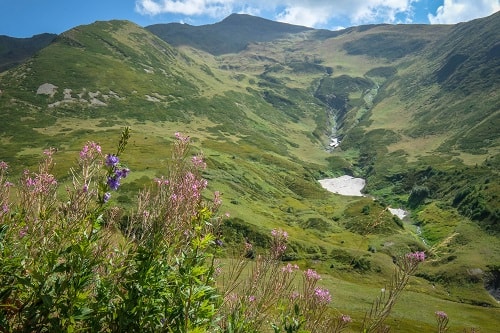 Gorgeous views along the road over Zagar Pass (Svaneti Georgia)

The nature showed us all its glory… wild landscape, naked Caucasus mountain tops and snow covered mountains, which were more than 5000 meters high. No matter how many photos we took during the drive, not a single one is good enough to really show the »wow« moments we had during the drive. 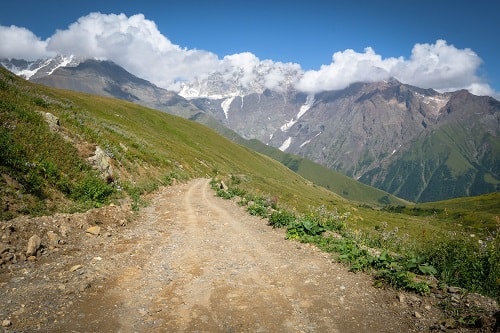 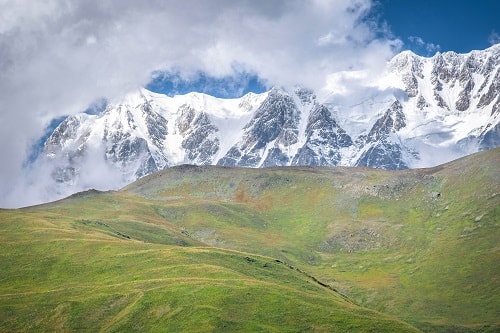 Just few years back the Zagar Pass was known as one of the most dangerous roads in the world – not because of the difficult drive, but because of ambushes in which local people robbed you. Luckily these kinds of stories are history and with that the Zagar pass is truly one of the best Svaneti experiences we did. 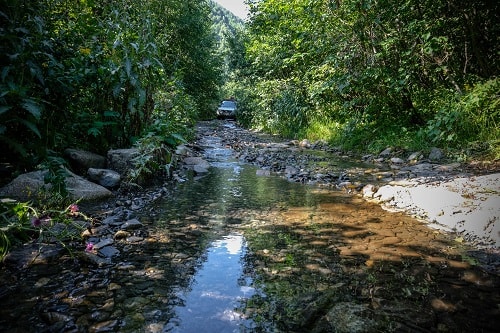 How to reach Svaneti Georgia?

If you’ll be traveling around Georgia by a rented car, reaching Svaneti will not be a problem. The best road to take is from Zugdidi to Mestia. If you’ll be using local transport, your best and cheapest options are the local vans called marshrutka. We would recommend you to jump on it in Zugdidi or Kutaisi. If we have correct information, marshrutkas should drive to Mestia from Tbilisi as well – from the main train station, but you will need at least 8 hours to reach Mestia. 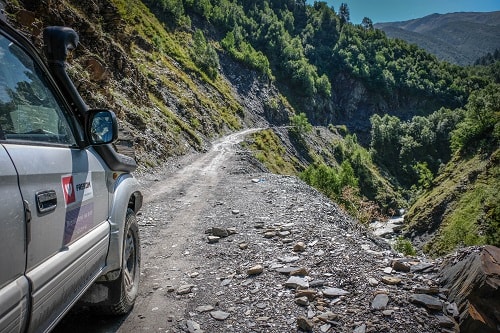 If you’re not keen on the long drive from Tbilisi, you can also choose the quickest, but also the most expensive option –you can fly to Mestia. The flights are only done in nice weather and with the Vanilla Sky airline.

Svaneti was a fairly dangerous place all until 2003, when robbing the foreign visitors were almost a daily thing. But with the clean-up campaign from the formal president, this stopped and Svaneti is safe now. Just don’t be too surprised when seeing men with guns around their waist – there are many and all of them are police.

We have read that the local people in Svaneti are unsophisticated and disregarding the laws, but we found them extremely friendly and welcoming.

With touristic development, which is still not in full bloom, there are mostly guest houses available. Few hotels are in Mestia as well and we also seen two camping grounds – we stayed in one – SvanLand (43.050710 / 42.738899, which is based around 1 kilometer from the town’s center. There’s another camp right next to the SvanLand camp. We paid 5 EUR/day for camping, including 2 adults, car, toilet, hot shower and Wi-Fi. 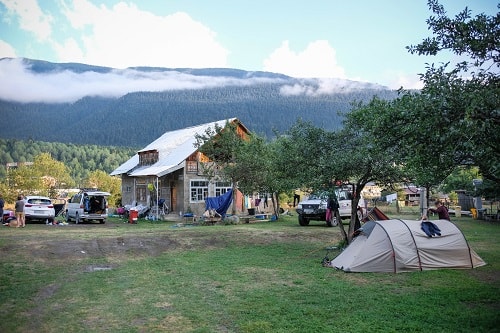 The prices for hotels and guest-houses depends of the season and services, but you can already get a fair room for around 13-14 EUR per night. Lots of GH offers breakfast, Wi-Fi and some even saunas. You can check accommodations in Svaneti here – Mestia and Ushguli.

Svaneti offers a wide range of things to do, including skiing in the winter, so there’s actually not a bad time to come. Nevertheless, the two most popular months are August and September – perfect time for hiking. 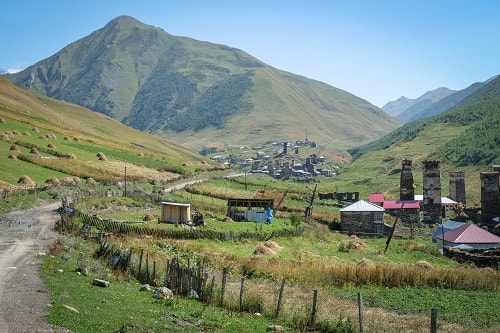 Mestia has few smaller cafés and restaurants, serving local food under good price – most of them can be found around the main square, including bakery. There are also few grocery shops, but don’t expect to find much in them. We would suggest you to stock yourself up with energy bars for hiking before coming here. 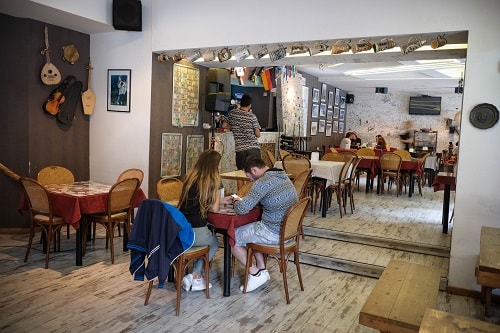 If Mestia was not stock well with grocery and energy bars, you can imagine it gets even worse in Ushguli. But Ushguli has a good choice of GH, where lunch/dinner is served as well. 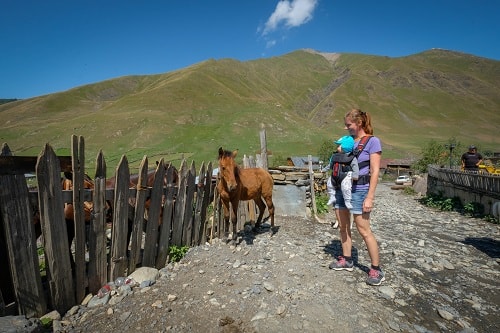 We hope Svaneti stays wild and pure for many, many years to come (Svaneti Georgia)

Even though you won’t be visiting Svaneti Georgia for hiking or for mountain-biking and you will miss out exploring charming Ushguli and driving over the Zagar Pass, the region is still worth visiting for its amazing nature and breathtaking views in Mestia. If you ask us, you did not see Georgia, when leaving out the beauties of Svaneti region, so make sure not to skip it out.