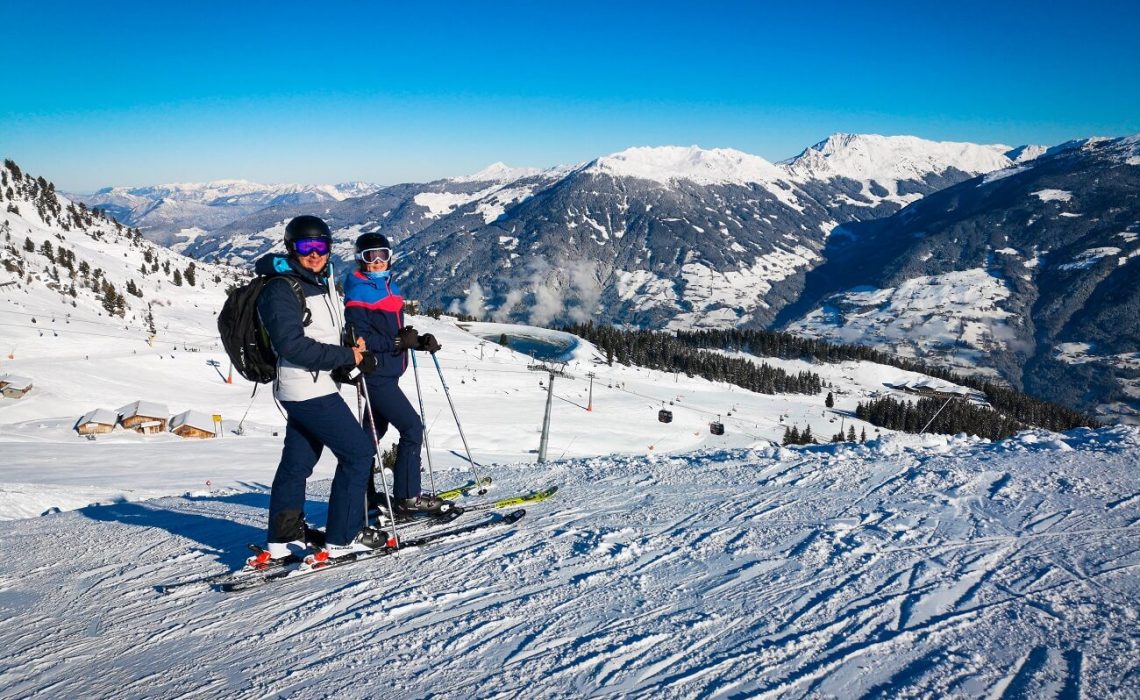 Skiing in Zillertal Austria is for sure one of the best and most popular winter sports you can do in this European country. If you will go skiing in Austria, you will not miss with Zillertal – the world’s largest skiing valley.

The snow was perfect, the weather could not be better – sun was shining and there was not a single cloud on the sky. The slopes were almost without people and we sure picked up the right timing to start skiing again. The location – Zillertal in Austria was amazing!

It has been more than 10 years from my last skiing, and even a little bit longer for Simon, but we finally got the needed push this year. After more than a decade we were one of the first one, who opened the ski season this year.

I must admit I was a bit nervous before my first slide down the slope, but it was actually better than I was hoping for.

View down the valley (Zillertal, Austria)

The Zillertal valley lies in the northern Tyrol region. With its 530 kilometers of skiing slopes is the largest skiing valley in the world. The Zillertal valley combines 4 different skiing areas: Zillertal Arena, Mayrhofner Bergbahnen, Ski & Gletscherwelt Zillertal 3000 and Hochzillertal-Hochfugen-Spieljoch.

Zillertal in Austria really tries to offer something new every season – new gondolas, new slopes, new activities. At the moment the skiing valley has 180 devices. This year a new gondola station in Hochzillertal got a brand new kindergarten for kids that don’t ski yet and are more than 3 months old. The playing area is spacious and offers amazing views, when the slipping area is separate and provides peace and quiet. Your kids will be taken care by professional staff. The booking should be done at least 24 hours up-front and is not included in the ticket price.

The valley has 180 devices (Zillertal, Austria)

Zillertal in Austria is not just the largest skiing valley in the world, but has also the steepest skiing slope in Austria. The Hintertux glacier can also be found here, which offers year-round skiing.

Skiing area in the Zillertal Austria spreads from 560 meter to 3250 meters above sea level and is open from 1st December until 22nd April. More than 72,8% of the ski slopes can be prepared with artificial snow, so it does not really matter how much snow falls, as the low temperatures is almost more important.

Even if you don’t ski, you can still enjoy the winter wonderland in Zillertal Austria. You will find 125 kilometers of cross-country skiing tracks, ice skating areas, locations for ice climbing and winter paragliding. There are even 14 different tobogganing tracks available, offering more than 45 kilometers of adrenalin rides – some even lighted to be enjoyed in the evening.

Don’t miss sledding and one of its 14 tracks (Zillertal, Austria)

An adventure with great views and 5,5 kilometers long (Zillertal, Austria)

Simon and I tried the Spieljoch tobogganing / sledding, which is 5,5 kilometers long and offers amazing views during the ride. Take the time to stop and just enjoy the splendid nature and all what surrounds you.

If you are keener on hiking, Zillertal Austria will not disappoint you either. You can choose from 400 kilometers of hiking trails. You can even do some tours with snow-shoe on.

Something for every budget in Zillertal Austria

Zillertal in Austria offers many unique experiences and it is up to you which one will you choose and how much you are willing to spend there. You can already find accommodations in simple guest houses, but you can also spoil yourself in 5 star hotels, which also include wellness areas. There’s a new gondola in Hochzillertal this year, bringing you up to the Albergo restaurant, offering 360° panorama views and 6 luxurious apartments, which truly are amazing and perfect for romanic get-away.

Something for our taste-buds (Zillertal, Austria)

One of the dishes in skiing cottages (Zillertal, Austria)

We stayed in Elizabeth hotel, build in the typical Tyrol style. The location is not far from the Spiejloch gondola and its brand new wellness, which spreads on 500m2 is definitely a great bonus. Not to mention its recently opened restaurant looks beautiful too.

The best option for skiing in Zilleratl is with its superskipass, which gets you lower prices when skiing, starting already with 2 days ticket. The tickets includes all ski-shuttles and public transport (trains, buses). Zillertal valley has good connections with a railway, what makes it also convenient and easy to reach.

Different events throughout the season in Zillertal Austria

Zillertal has many events during the winter. During our visit we were able to enjoy the ski-food festival, where 14 countries represented its traditional food in 14 different cottages on the slopes.

14 different cuisines felt like traveling around the world (Zillertal, Austria)

One of them was also Croatia (Zillertal, Austria)

The ski.food festival and it’s location was at the Fugen castle (Zillertal, Austria)

The ski-food festival lasted for 2 days and the ending took place in a small town of Fugen, where 14 countries had its own stand. You could buy different dishes and travel around the world in just in one evening.

Whether you drive, fly or take a train to Zillertal, the valley offers many different options for renting the ski equipment. We rented it out in Intersport in Fugen and got brand new equipment and great service too.

I am not really a great skier and I mostly enjoy on blue slopes, but I must admit, I did not even know, how much I missed skiing before I got back on the white slopes again, Zillertal in Austria being one of the best locations we could choose.

Watch the video about spending the perfect skiing in Zillertal here.

Austria, Europe
Best hiking day trips from Graz
Austria, Continents / Countries, Europe
9 best things to do in Austria all year round
Blogging, Inspirational
Is it really so bad we are stuck at home?