LIVE: When you find yourself in the middle of a smuggling road… 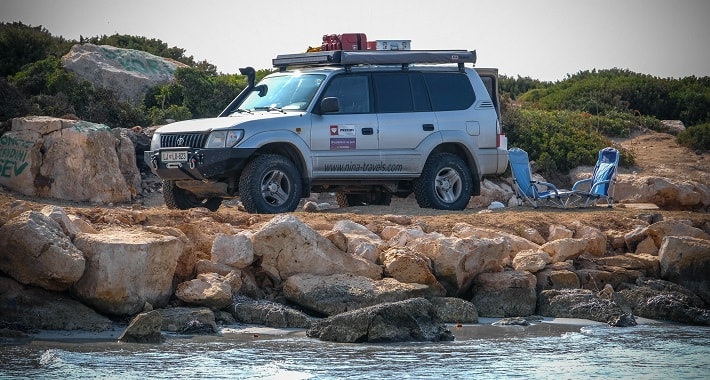 We have been traveling along the west coastal side of Turkey for the past couple of days. This part is well known as a smuggling road for people wanting to come into the European Union. Knowing that, it is no surprise, we were waken up in the middle of the night by the police.

We found a really nice bay for another wilderness camping spot, looking straight at the Greek islands. Seeing the police boat in the sea, I told Simon, we might even get a visit by the police in the middle of the night.

And look at me… I was joking, but I was right. We actually got two police check-ups, not only one.

We were all well asleep, when I heard knocking on the window. I recognize two men, walking around the car and pointing a torch towards us. I woke up Simon. I though he started to observe the action around us, but he first though I was the one knocking. He did not put much attention to it and went back to sleep. I was well awake and watching, listening… here it was again… knocking… over and over and louder and louder. I also heard someone saying »police«.

I woke up Simon again and he finally realized what is going on. He opened the door and two men were in front of us. I guess we looked confused and that is why they were showing us their police badge, asking numerous questions – where are we from, what are we doing here, where are we going, why don’t we sleep in the hotel, what is our job… They wanted our passports. After checking them carefully, they said it is not safe here and showing us to Greece to understand what they are trying to explain. But they allowed us to stay here anyway.

After about 4 hours, I hear something again. Another torch was pointing at our car. This time two men were looking at our gear on the roof-trunk. I woke up Simon, thinking they want to steel our stuff, so he opened the doors and guess what – it was police control again. One policemen spoke a bit better English and when he was asking us all kind of questions again, he was repeating himself how dangerous is to be here, because of the immigrants trying to go to Greece. This time we were not allowed to stay here, but they used our navigation system to show us where we can go to stay the night. And so we went…

For many people our traveling around Turkey is a bad timing, but honestly, we have not got a single problem yet. Nevertheless, these policemen shake us a bit up, to realize problems can happen. From now on we will definitely be more careful, when choosing a place to stay the night.