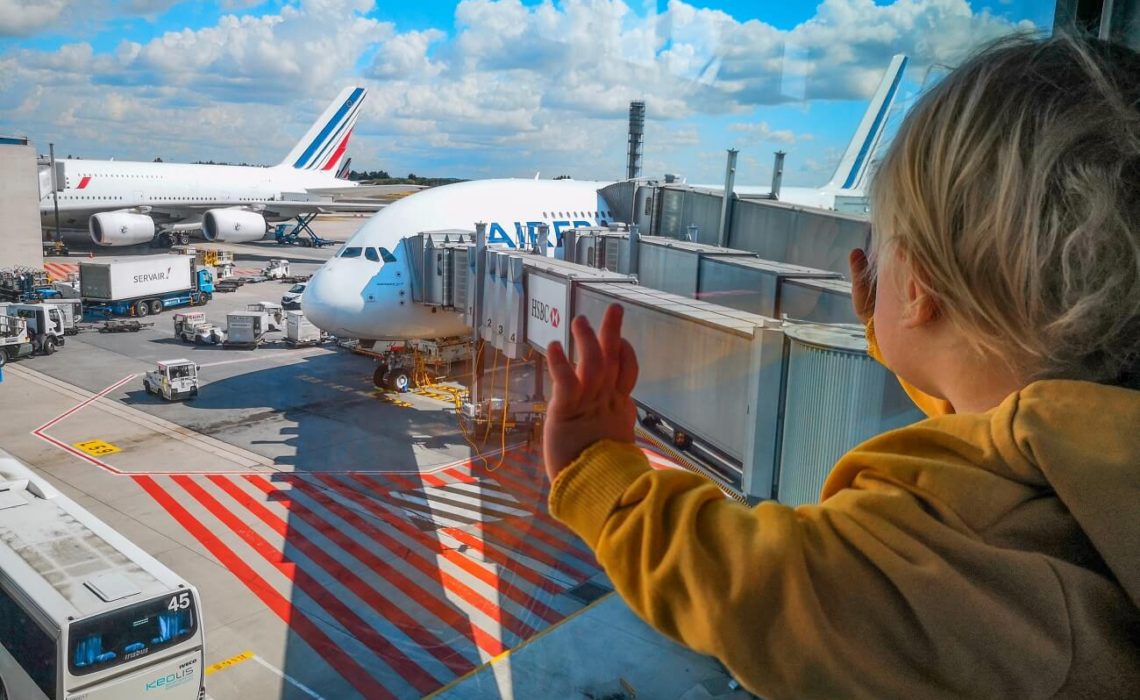 We did a lot of overland traveling with Ren, but he was already 19 months old, when we took him on his first flight. I must admit, I was a bit scared how this will work out, as he can’t be still for long and always has full of energy. But luckily our worries were for nothing and taking him on the plane for the first time, it was a pleasant experience for all of us.

If you are in the same boat as we were, don’t stress too much. To make your planning even easier, we have also prepared few travel tips on kids and flying.

Simon and I both had a carry-on backpack, but we prepared one for our little traveler too. It was more of a bag than a backpack, as he was too young to carry it himself, so it was easier to carry the bag inside of my backpack when not need it. We put Ren’s favorite things inside – actually new things, to catch his attention easier. He likes to read, so we took two new books with us, one new toy, some paints and note-book and few stickers, what definitely was a good pick.

If you are traveling with kids, you should also take snacks with you on the plane. Don’t wait to buy them at the airport as you could have a quick transfer or your little traveler will be already hungry before reaching the international area. If your little traveller still shares a sit with you, he/she also won’t get his/her own meal, so having something specially prepared is clever.

We packed dry food, bread and some fresh fruit too – everything can be taken on the plane without problems. If you are still nursing, that’s actually the easiest way to travel, but if you are just adding solid food, you can even bring that too. You might need to eat a spoon or two at the security check, but no-one should be taking that away from you. Cabin crew is normally also very helpful with heathening up a bottle of baby milk, so ask if you need anything.

We did bring some cartoons on our USB, but at the end we just used the cartoons which were part of the flight entertainment program. Ren was fine with that, but later on he was more attracted to the new books and stickers.

We used the drop at the aircraft service and kept the stroller because of our transfers. We could check-in the stroller, but it was much more practical having it with us at the airport too.

I am use to packing few extra clothes in my carry-on backpack, just in case the check-in luggage is delayed. I also did the same now, including with some of Ren’s clothes – very useful also if he spills the beverage or food all over him. An extra T-shirt was a good option for me too in the spilling case.

You cannot embark the plane without diapers and wet wipes. We packed 10 diapers in the carry-on bag, especially because we had to do a transfer and just in case there would be a delay or some circumstances, which is impossible to predict. I cannot imagine to stay without diapers in the middle of the airport – not even sure if you can buy them there?

There is a changing table in the airplane toilet too, but it is super small and comfortable only when you are traveling with a baby. We still manage to use it, but Ren was not very happy about being up there. If you are already accustoming your child to be diapers free, make sure to bring the baby toilet seat attachment with you too.

We had two flights – a short one and a long one, so we wanted to have more space during the longer flight and booked the seats in front of the wall, where it is also a place for the basinet. Basinet is usable only up to 10 kilos, what was just enough for our Ren.

When we were flying from Paris to New York City with Air France we just put Ren on the floor and no-one said we cannot do that, but on the way back, we were advised not to do it by the cabin crew and got the basinet. Ren was already pretty big for it, but he still managed to sleep all through the flight.

When we decided which tickets to take, we decided the best option should be to have a red eye flight. We were hoping that Ren will sleep well and we won’t have any problems with him. But he was actually so excited about planes and flying, he hardly got any sleep and was up half of the time.

Nevertheless, he was sleeping for the whole New York City-Paris flight, as we took-off at 10pm and he was awake until then. He was so tired at the end, he fallen asleep in my arms before we even took off.

Excitement about the planes

I am not even sure when Ren got so interested in planes – and that was even before we decided to travel to New York City with him. I guess, having this passion and showing the planes every time he saw one in the sky, it was much easier to introduce him with flying.

I guess there’s no science behind the fact your kids should be dressed comfortable for the plane and that goes true for parents too. I’d advise you to dress without belts, so you don’t have any extra work with security check and you can go through easily and fast. If the stroller is the right size, it also goes through the security checks, so it is much easier that one parent can hold the baby in his/her arms, when the other one handles security.

I sure hope that at least some of the mentioned travel tips will be useful and lower the stress when taking your kids on the airplane for the very first time. But in general enjoy and be aware that kids do cry too. But one thing is certain – traveling and enjoying all the new things and experiences are just too precious to avoid them because of being nervous and scared about flying for the very first time with kids.