Food in Armenia and Georgia 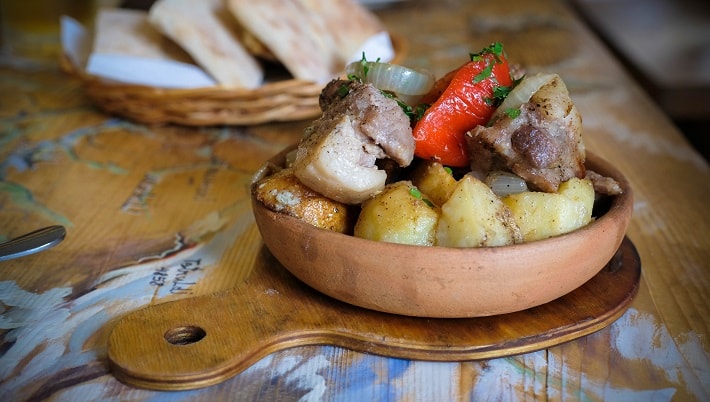 Food in Armenia and Georgia is very similar and that is exactly why we have decided to join these two countries together, when writing about their food. Both countries, Armenia and Georgia, were part of formal Soviet Union, but surprisingly the food has more in common with the Iranian and Turkish cuisine than Russian.

Food in Armenia and Georgia

We loved the fact that food in Armenia and Georgia is based on local ingredients – they use lots of meat and vegetables. No matter what dish you will order, prepare yourself for loads of garlic, coriander and cumin. Don’t even be surprised if there will be walnuts included as well.

When in Armenia and Georgia you cannot avoid different stews. Luckily, most of them are delicious and are made with veggies and big chunks of meat (chicken, pork, lamb). If you are having bread with the stew, you can easily be full just with the stew. 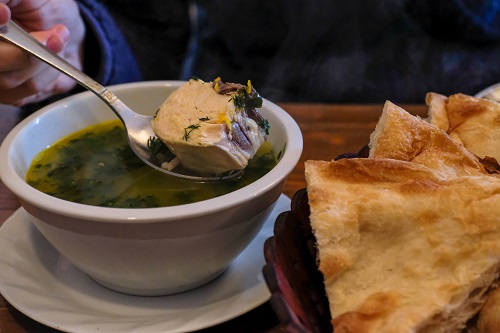 Stew (Food in Georgia and Armenia)

Tasty, but for many, a bit too greasy are their potato dishes, served in a clay pot. The potato dish includes lots of garlic, onion and meat as well. 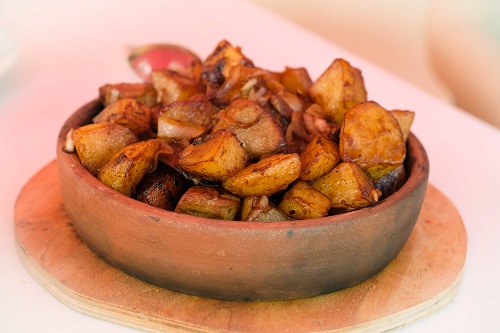 Don’t miss out tasting the Mtsvadi – piece of BBQ meat on a stick, which are delicious. 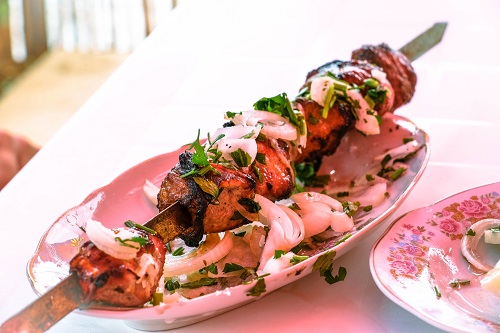 Mtsvadi (Food in Georgia and Armenia)

Armenia and Georgia has four season climate and from spring to late autumn, fruit and vegetables are in abundance. Armenia is especially known for its apricots – it is said they’re the best in the world. We, unfortunately were there in September, so it was not the season for them anymore, but luckily we found some dried ones at the local farmer and I admit, they were the best we ever have tasted. 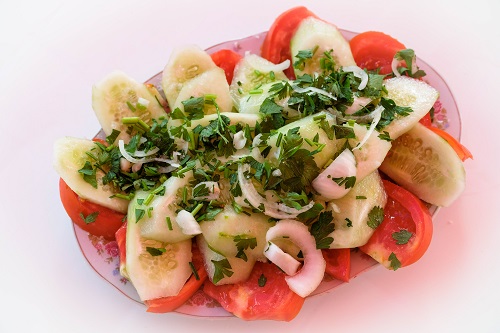 Salad (Food in Georgia and Armenia)

Lots of dishes are made out of eggplants, garlic and walnuts. Sometimes also pomegranate is added.

Khachapuri is one of the most common and typical street dishes in Georgia. It is also known in Armenia. Khachapuri is actually flat bread, which has white cheese added. Everything is baked together and the taste is delicious. It is pretty greasy and filling, so don’t travel to Armenia and Georgia during a diet. 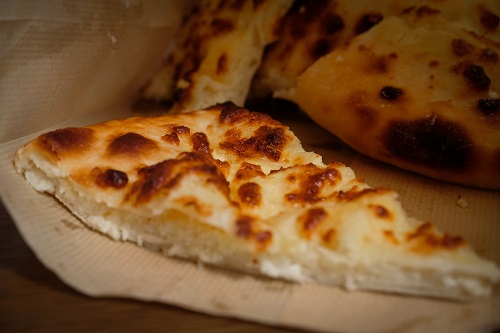 Khachapuri (Food in Georgia and Armenia)

Each region has its own version of Khachapuri, but one of the most popular one is the Adjara Khachapuri – a flat bread, shaped as a boat, with an egg (sunny side up) in the middle, added chunks of butter. The portion which we had was large enough for two hungry adults. 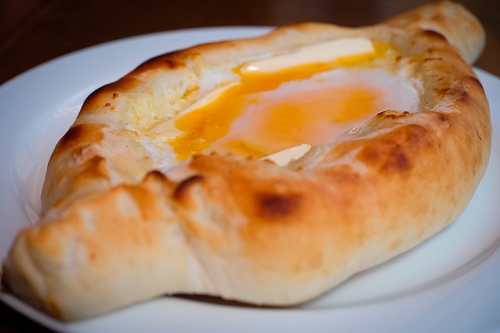 Their traditional flat brad, called lavash or puri is also delicious – make sure to try it warm. It is still baked in the underground stoves. We have started and finished each day with lavash / puri–. 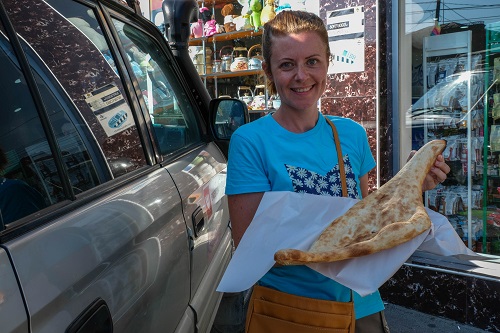 Lavash (Food in Georgia and Armenia)

Khinkali can be best described as filled dumplings, having different fillings, but most popular are the ones with meat inside.

Candle or salami shaped candy, which main ingredients are walnuts, dipped on a long string into the grape must, mixed with flour and sugar. It is a delicious and rather healthy snack as well – especially when comparing it to super sweet baklavas. Most of Churchkhela is sold in autumn along the roads by local farmers. 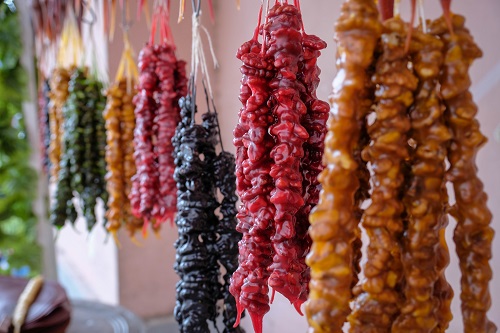 Churchkhela (Food in Georgia and Armenia)

When we talk about Tklapi, it can be best described as a healthy snack – puréed fruit roll-up leather. It is sundried when spread thinly onto a sheet. It was firstly made out of plums, but nowadays we can buy different kinds – from apricot, kiwi, apple, pomegranate… 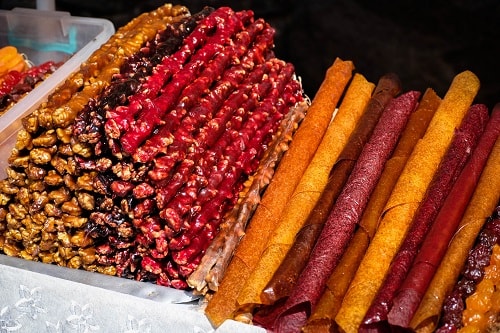 Tklapi (Food in Georgia and Armenia)

O yes, when you’ll be traveling around Armenia and Georgia, you won’t be able to avoid the booze. Georgia is best known for its Qvevri Wine production. Georgia is actually one of the oldest wine regions in the world. 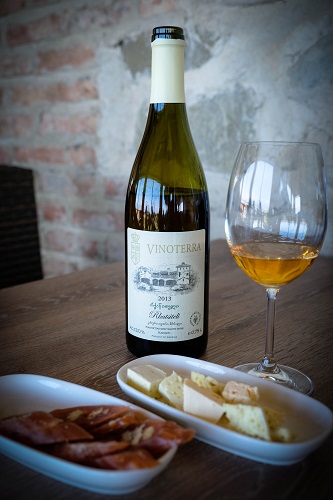 Instead of vodka, you will be served with Chacha – some of them are having more than 65% of alcohol, so get ready. On the other hand, Armenia is best known in the world for its brandy, what is definitely a must souvenir to take home.

But don’t worry, there’s not all about alcohol – in fact, Armenia has delicious home-made teas – I especially liked the most popular one – thyme tea. 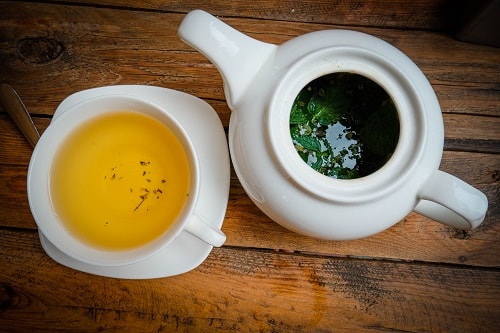 Food in Armenia and Georgia might for many be monotonous, but if you are not too picky and like to try everything, you can easily spend a month here and you’ll have a new dish in front of you each day. And if you are keen on fruit and vegetables, make sure to visit Armenia and Georgia during spring and autumn – you will indulge yourself with fresh and local ingredients, which will make your stay here even tastier.

food in armenia food in georgia
Leave a comment