Did you know that people used umbrellas more than four thousand years ago? They were first used as shades by Egyptians, Assyrians, Greeks and Chinese. In fact, Chinese first started using them against rain as well. Luckily, we still can find some traditional workshops in Asia, to see, how these indispensable accessories are being made. 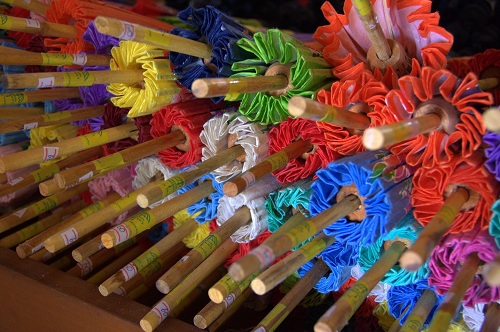 How to reach Bo Sang?

The best starting point to reach Bo sang is from Chiang Mai. Go to the flower market and hop on the sorng-taa-ou. It will take you to Bo Sang for less than one Euro. Go off from the bus when seeing umbrellas on the street, meaning you came to the right place. 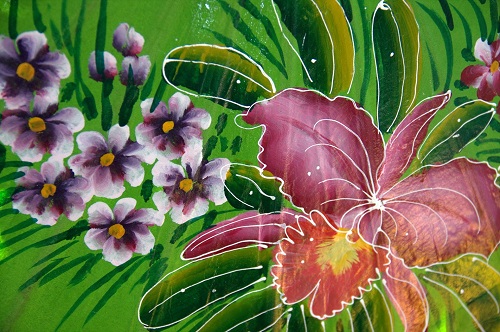 Most of traditional umbrellas are decorated with flowers and animals (Bo Sang, Thailand)

Bo Sang and its umbrellas

It all started about one hundred years ago, when a monk from Myanmar brought the knowledge to Bo Sang. He taught the locals, which are still skilled in making umbrellas according to an old tradition.

It would definitely be strange, if the tradition would not become known worldwide, so do not be surprised to realize, that lots of smaller workshops closed their doors. One of the major players is a big production facility, right at the beginning of Bo Sang. Umbrellas there are still made traditionally by hand, but everything became more commercialized and it is there to make profit. 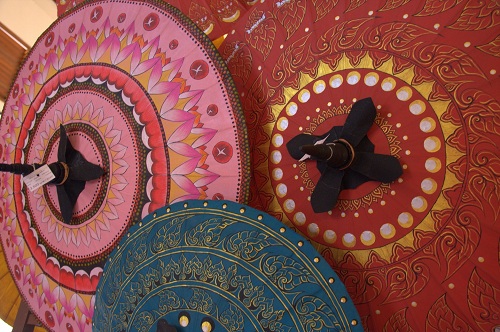 Traditional umbrellas did adjust to nowadays and are available in modern patterns too (Bo Sang, Thailand)

Nevertheless it is still nice to visit the place and find out, how umbrellas are being made as each process is clearly shown to visitors.

Even the huge shop is worth the look, as you will not be able to get the clear image of the umbrellas, before you see hundreds of them, but not even one alike.

If you want to bring home a memory on your Thailand trip, than Bo Sang is definitely the place to buy the traditional umbrellas, as you will not find any more beautiful nor cheaper elsewhere in Thailand. 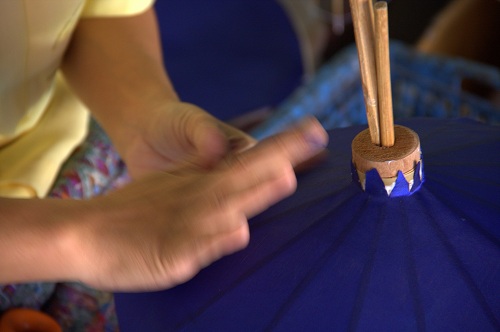 How the umbrellas are being made

The processes slightly diverse from purpose of the umbrella. The material is chosen differently if the umbrella is used for rain, for decoration or for a shade. You can find them made out of silk, paper or even cotton. The frame is made out of bamboo wood, which is connected with a string. The paper is produced from mulberry tree bark, spent hours in boiling hot water. 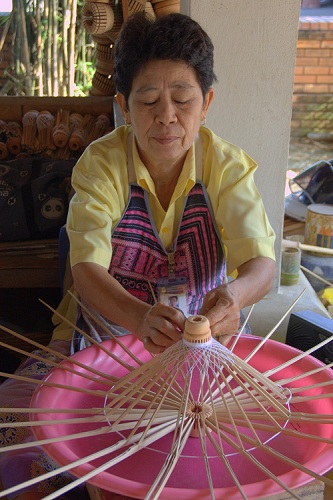 The umbrella frame is made out of bamboo wood (Bo Sang, Thailand)

Bo Sang tradition is getting a tourist attraction

It is hard to miss, how Bo Sang is connected with umbrella making. There are not just shops, filled with all kind of umbrellas, but even the streets signs and bus stations have umbrella decorations. It is nice to see, that tradition is holding up, even though for majority of people that means just another way of getting money from tourists. 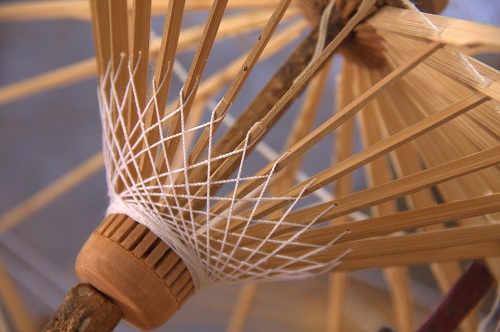