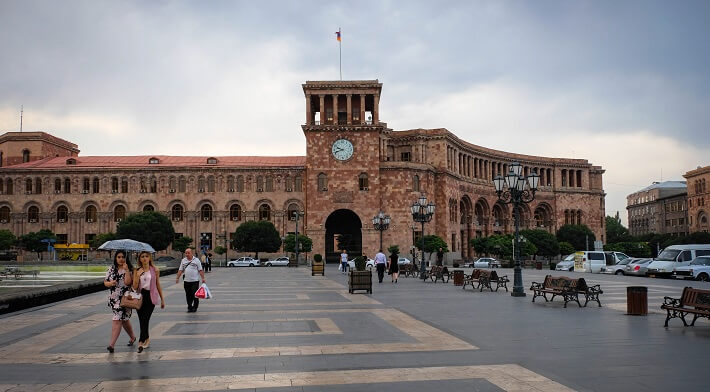 Since 1918 Yerevan has been the capital of Armenia. It has a little bit more than one million inhabitants and a drive through can be a bit chaotic – especially during rush hours. Yerevan still looks a lot like it did once, magnificent Soviet Union city, so these capital should not stay overlooked when traveling around Armenia.

One of the main Yerevan tourist attractions is the central and main square in Yerevan is the Republic Square, known also as Hraparak among locals. There’s a huge fountain on one side of it, which probably looks glamorous when it works, but unfortunately it was off and in a bad shape during our visit. The Republic Square is surrounded by 5 most recognized buildings in Yerevan – the National gallery, History museum, Government house, Ministry of foreign affairs and one of the best hotels in Yerevan – the Marriot Hotel. The Republic Square was once named as Lenin square and during the Soviet times, the square was not missing the Lenin’s statue. 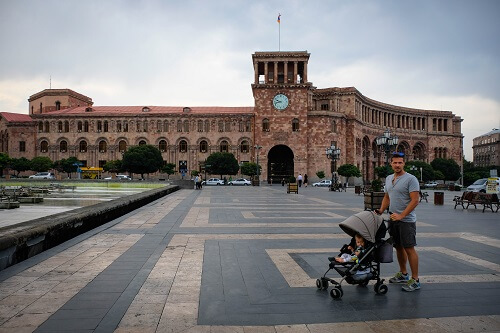 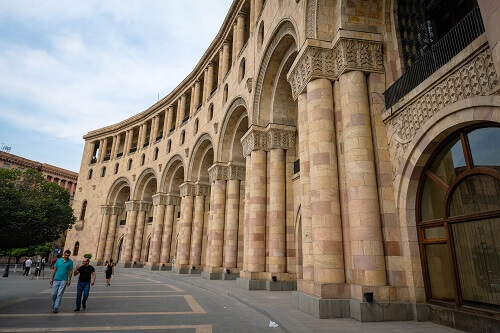 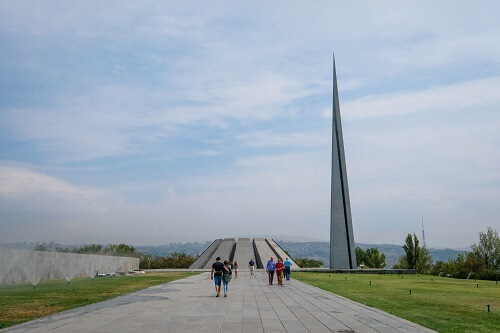 The Tsitsernakaberd memorial is grand, but if it will not leave you speechless, the interior will. Inside of the Tsitsernakaberd memorial is a museum of the genocide, with all the photos and descriptions of the brutal acts, which will leave your heart with a big scarf… Nevertheless, it is a great and beautifuly done reminder of the past, which should never be forgotten. 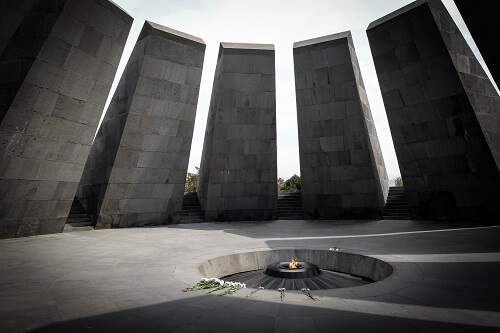 Brandy production in Armenia has a long history – everything began in 1877, during the Russian Empire and the Ararat brandy production is the oldest production in the country. Everything started with wine but just one decade later brandy took over the production. Nowadays brandy is so important for the city, that you can easily say Ararat tasting tours are one of the best Yerevan tourist attractions for many. 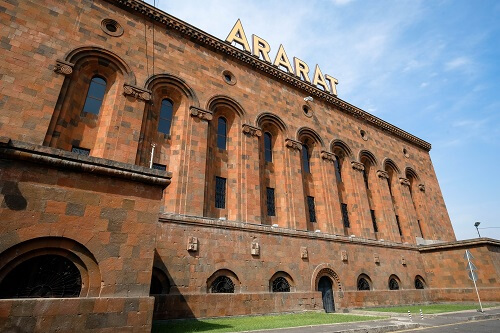 If you’ll be visiting Yerevan and stopping at the Tsitsernakaberd memorial, you will pass the big orange brick building with the name Ararat. A stop is a must and not just to buy the brandy, but also to take part of the guided tour with tasting. The Ararat brandy (especially the older one) is delicious and if you don’t believe us, you might be convinced by Frank Sinatra, Agatha Christie and Winston Churchill – fans of the Ararat brandy.

The Northern Avenue is actually a pedestrian street, opened in 2007, with 450 meters in length. It is full of shops for everyone who can afford to spend up-scaled brands. There are also luxury residences there. If nothing else, a walk through it is interesting and will also take you up to the City Opera house – another Yerevan tourist attraction. 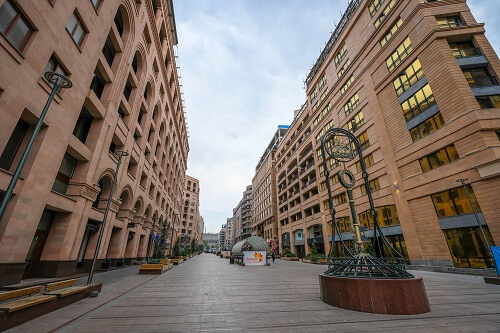 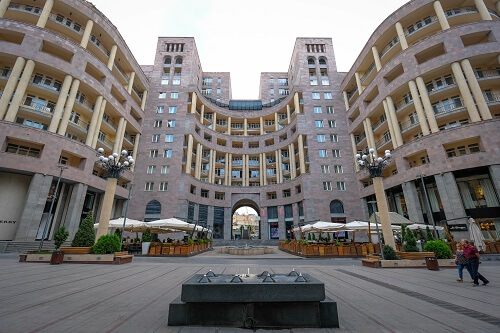 Even though you might not buy ticket for any of the shows, it is nice to walk around the Opera House in the afternoons and evenings, as the area is full of trendy cafes and bars. But if you’re more interested in shows, check out last-minute tickets, which can be bought cheaply. 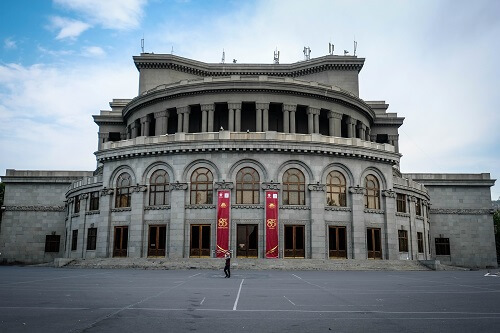 Yerevan has a large stairway, made out of limestone, which is full of modern sculptures. Cascades are also full with trendy cafes and are actually one of the most recognized tourist attractions in Yerevan. The building of Cascades started already in 1971, but everything was finished no sooner than in 2009. Unfortunately we missed that when in Yerevan, but it is said it is definitely one of the best Yerevan tourist attractions to be found.

The main religion in Armenia is Orthodox, but we can still find a beautiful Shiite mosque from 18th century here. The Blue Mosque is by now the only mosque in Yerevan. 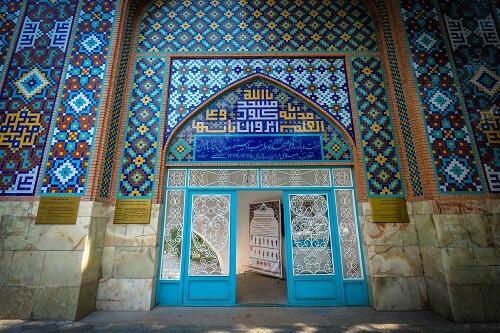 Armenia got its own first food chain in 2005. We could say Karas is somehow fast-food restaurant, but with some differences – you will not get hamburgers there, but luckily just local Armenian dishes. If you are looking for cheap, good and local food, Karas will not disappoint you. There are menus in English as well. 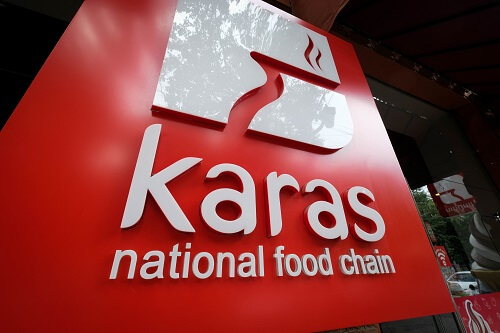 Every city is unique and much more interesting because of its local markets and you can find some interesting ones in Yerevan as well. It depends what you like best, but flea markets are really worth the exploration.

Not long ago, Armenia did not even have the culture of drinking coffee in a café, but Yerevan has lately been getting more and more popular with all kind of interesting cafes. Join the modern locals, while zipping a cup of Turkish coffee or maybe thyme tea…or just indulge yourself with a glass of Ararat brandy. This is for sure one of the newest Yerevan tourist attractions, which we really enjoyed. 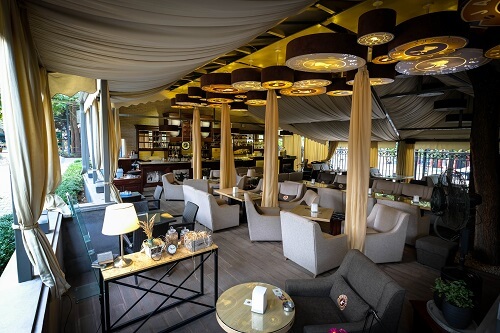 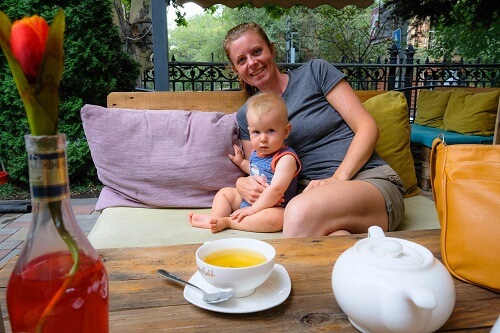 Yerevan tourist attractions are much more than the ones written above, so take time for Yerevan, as it has much more to offer than you have ever imagined. Even though you were never keen on big cities, Yerevan might surprise you as well.