16 Best tourist attractions in Valencia for an unforgettable trip 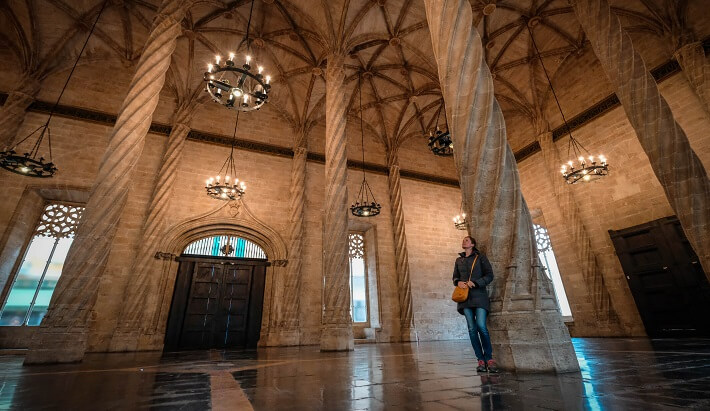 Tourist attractions in Valencia are extremely diverse and rich in its offer, so no wonder this this Spanish city attracts and impresses different kind of travelers. Due to its numerous tourist attractions, Valencia is perfect for single travelers, couples, group of friends or families.

This vast area spread over 35.000 square meters and with all the modern architecture is one of the most recognizable and best tourit attractions in Valencia for sure. The whole area was constructed by world famous, but local architect Santiago Calatrava. 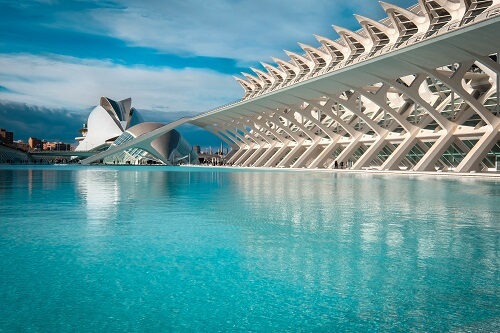 City of arts and sciences (Best tourist attractions in Valencia) 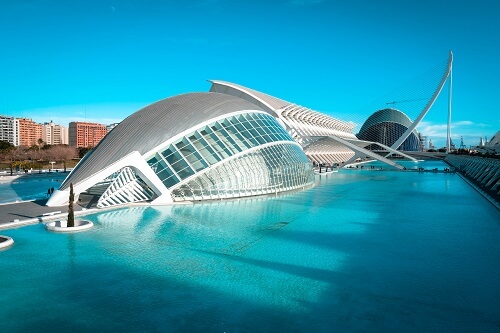 City of arts and sciences (Best tourist attractions in Valencia)

We were so impressed over this area that we visited it twice during our stay in Valencia. We did not go inside (except for the Oceanografic), but next time we will for sure visit some of them as well – The Hemisferic (3D cinema), Science museum,  Art palace, Oceanografic (Aquarium) can easily be put on the list of best tourist attractions in Valencia.

La Lonja was historically important ever since 15th century. The place was used as silk and commodity exchange. Its Gothic interior is breathtaking and in my opinion one of the most amazing tourist attractions in Valencia. 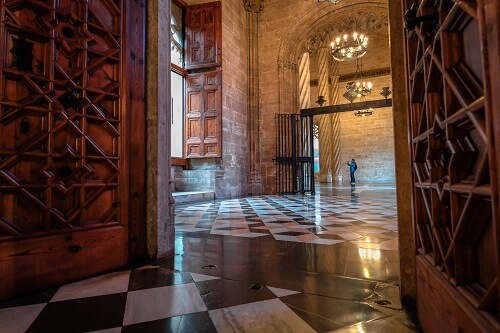 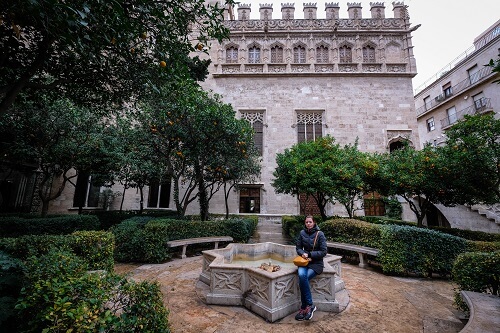 Valencia has one of the biggest and nicest markets in Europe. It was built in 1928 and contains 350 stands, selling local goodies – from fruit, vegetables, sea-food, meat, cheese, bread and even cooked food for a quick and yummy bite, so come hungry. If you are a foodie or not, visiting the market should be on your bucket list of the tastiest tourist attractions in Valencia. 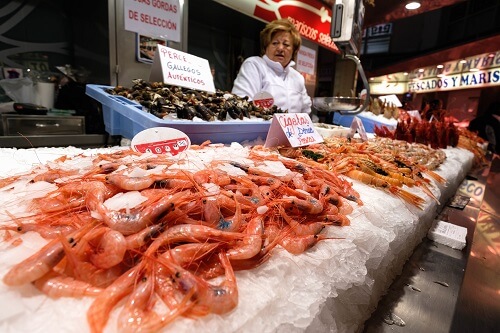 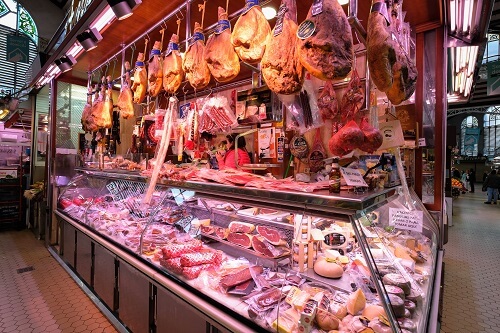 The market is opened from Monday to Saturday from 7.30am to 3 pm. 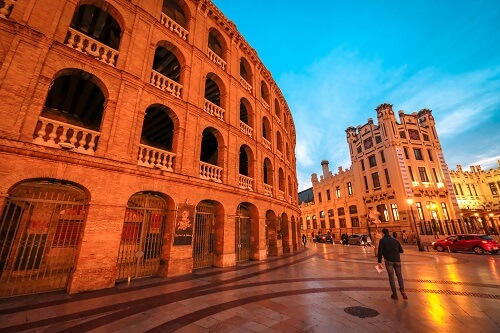 Lots of tourist don’t go further from the old city center, but if you want to find the most popular and trendy district where locals meet and hang out with friends in the evenings, you have to stop at Russafa, being one of the best night tourist attractions in Valencia. Russafa is mostly known for trendy tapas bars and restaurants, but be aware that the best are not opened before 9pm. 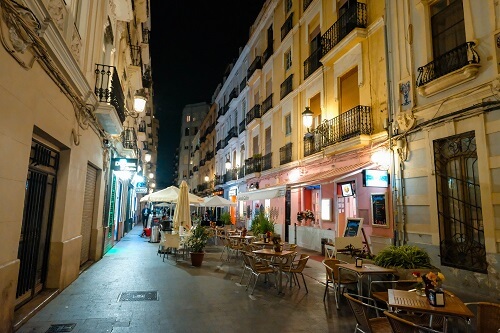 Throughout history, Valencia suffered from flooding, but when the major flood in 1957 damaged the city, it was decided to change the course of Turia River.

Instead of the Turia River, you can now find there one of the largest urban parks in Spain. From one end to another, the park is 9 kilometers long what makes it a great leisure and recreation area and also very popular tourist attractions in Valencia for young and old.

Turia gardens have great cycling lines, walking trails, numerous children playgrounds. They offer peace and quiet from the hustle and bustle of the city. A walk under 18 historical bridges is a great way to get to know a different face of Valencia. 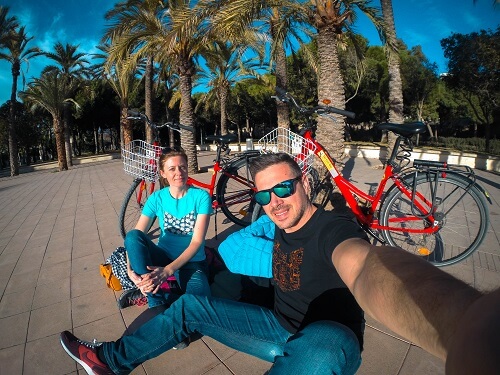 Turia gardens must be especially nice during the spring time, when flowers and trees are in full bloom and everything looks charmingly green.

If you are keen on football, you just cannot go pass the Mestella stadium. It is close to the Turia gardens, meaning you can hear loud cheering if you are somewhere close during the football match. Believe it or not, but we did visit the Mestella stadium solely because we heard loud cheering, which made us curious. If you are a fotball fan you will definitely mark this as one of the unforgettable tourist attractions in Valencia. 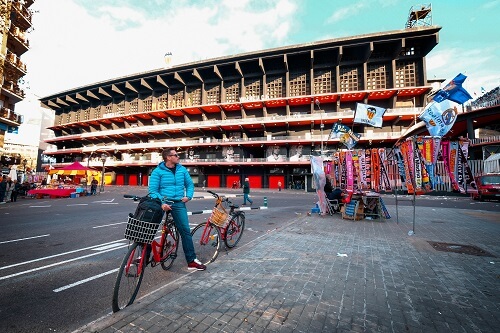 The stadium was built in 1923 and ever since then, it is home to the FC Valencia. It has 49.500 seats, but for all the enthusiastic football fans, they are building even a larger one, which will hold up to 75.000 visitors.

Even though you will not visit Valencia for the food, you will be happy to know, you will eat great here, including some of Valencia’s specialties. Did you know the famous Spanish dish paella originates from Valencia, what sure makes it as one of the most recognizable tourist attractions in Valencia. Read more about food in Valencia here. 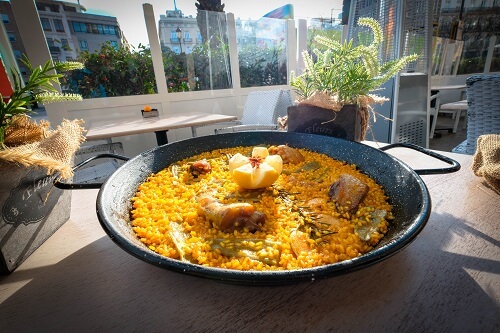 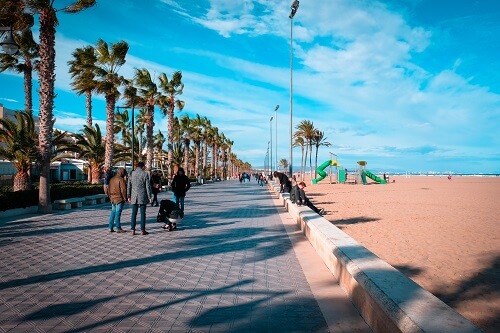 If you enjoy museums, you came to the right place, as Valencia is full of them. Most of them are based in beautiful historical buildings, what makes it a great place to wander. Oh and if you happen to be in Valencia during the rain, museums are one of the best tourist attractions in Valencia, where you can avoid the bad weather. 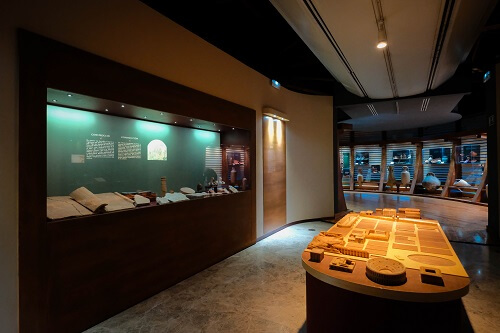 Valencia was once a fortified city and the Torres de Quart dated in 15th century. The tower is known as the most beautiful one in Spain. For that exqact reason the city tower can also be found among best tourist attractions in Valencia. You can visit it and climb up, but only in a dry weather as the floor gets slippery during the rain. 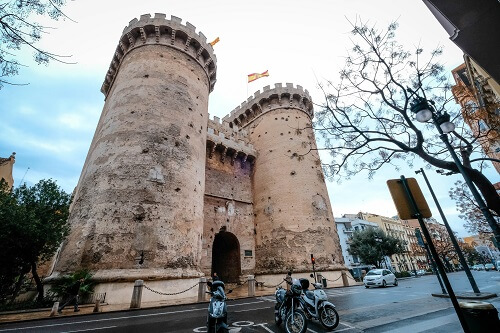 You might decide not to see any of the above tourist attractions in Valencia and you will use your time in the city just to wander around its streets. The streets are like an open-air museum, full of history, cute traditional cafes, bars, orange and palm trees… You for sure will not be bored. 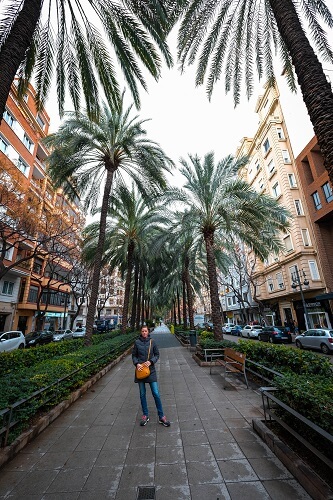 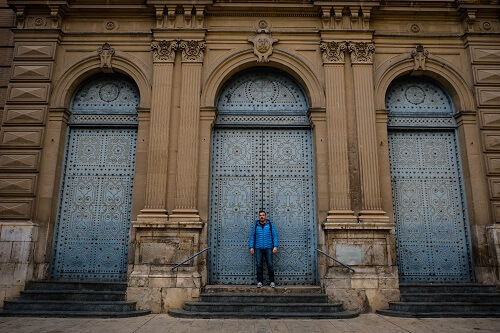 Not far from the city, around 25 kilometers, lies an interesting lagoon, where rice is being grown. The rice is used in traditional paellas. Some of the best restaurants, where you can eat paella can be found in the lagoona. The lagoon is also popular for bird watching and short boat trips. If you have an extra day to spend, visiting the lagoon will for sure be one of the best things to do in Valencia.

Fun tourist attractions in Valencia for young and old

One of the best tourist attractions in Valencia for kids is the Gulliver Park. It is not great just because it is free of charge, but also because it is suitable for young and old. You can climb on top of Gulliver and slide down from his head, belly, and finger. Some slides are pretty high and steep, so prepare yourself for some adrenalin rush. 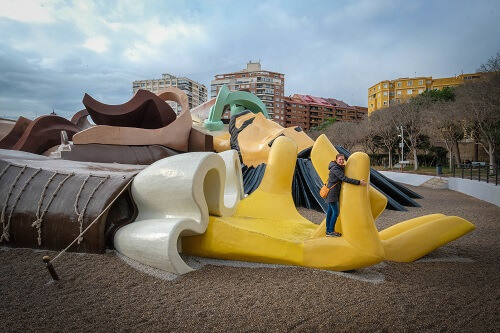 Oceanografic is the largest aquarium complex in Europe and we visited it as well. We first thought to be there with our baby boy, but because of his illness we visited it by ourselves at the end and still enjoyed it a lot! No wonder the Oceanografic is considered as one of the best fun things to do in Valencia. 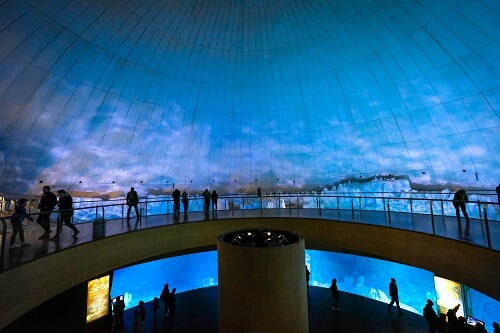 The water for the tanks is being pumped directly from the sea, but its quality is always measured. The Oceanografic is not just an ordinary aquarium, but it is also a research and training center. 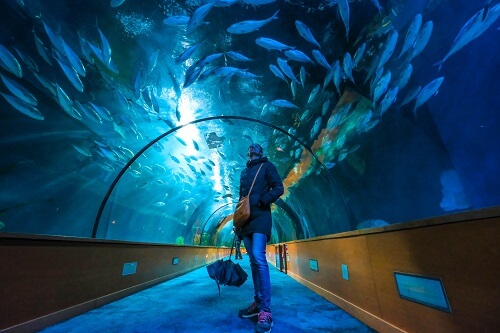 The largest attraction in Oceanografic is its enormous shark tank and aquarium with belugas. You won’t even miss the dolphins, which will put a shine on your little ones for sure – especially in their own show. 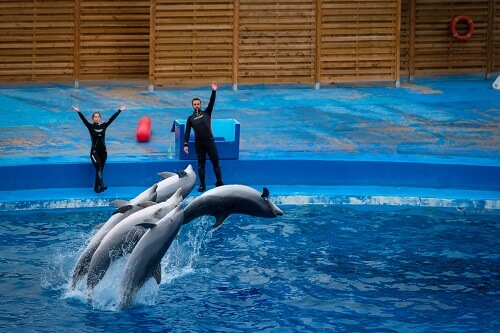 The Oceanografic tries to educate people, how important is saving the environment and try to make it a better place for sea-animals, especially in reducing all the plastic which we use in our lives daily.

How many times you wanted to go on a safari, but it was too expensive for your budget? 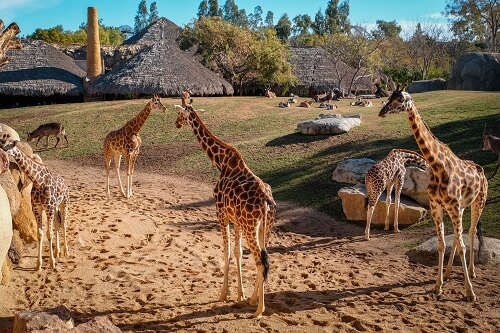 Sure, being on a real safari somewhere in Africa is unique experience, but you can still explore some of Africa on your travel to Valencia. 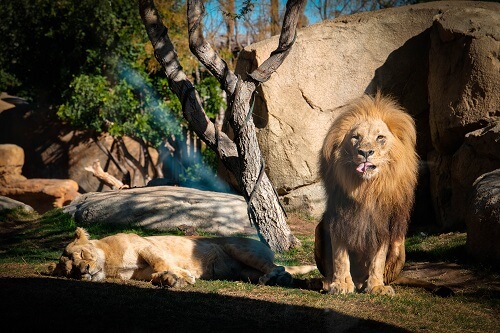 The Bioparc in Valencia is some kind of modern zoo, which contains only African animals. The best thing about it is you can almost forget you are in a zoo, as animals are not found in old-fashioned cages, but on large open spaces. One of the best tourist attractions in Valencia for sure. 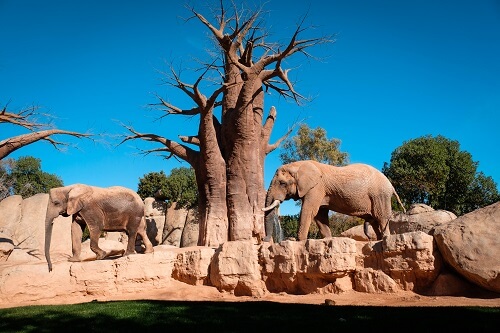 Bioparc tries to educate its visitors about the animals, about their natural inhabitant and teaches them how to respect and make the safe environment for them. 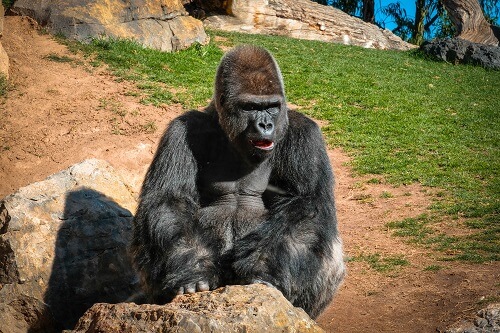 You can see leopards, giraffes, hyenas, hippos, rhinos, elephants, crocodiles, gorillas, lions…. And guess what – you can even visit “Madagascar” and walk freely among lemurs – watch out, as they can cross your path. 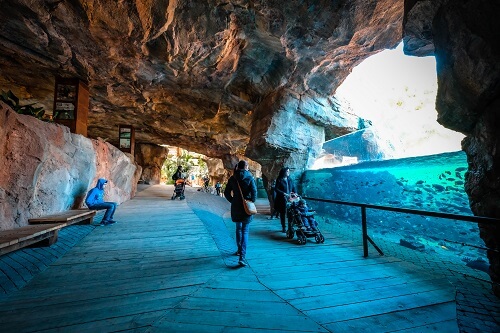 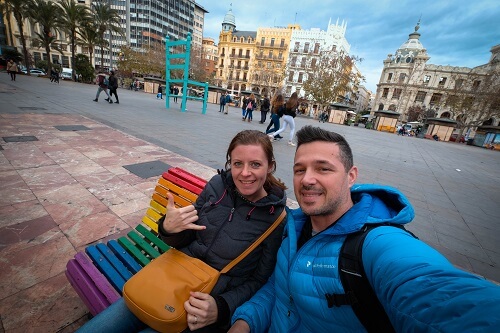 We loved our romantic weekend-getaway, but next time we are taking our little munchkin with us (Valencia tourist attractions)

No matter how many tourist attractions in Valencia will you visit, the only danger out there is that Valencia will charm you and you will want to visit it again – at least I know we do, but next time we are not leaving home without our little munchkin.

Nothing can be better than staying in a hotel with location just steps away from the best tourist attractions in Valencia. We enjoyed the hotel Conqueridor for the good location, rich breakfast and metro access. We had the old city center almost in front of us. The hotel was also close to the railway station, restaurants and cafes. If you prefer staying in an apartment, my sister stayed at the SingularStays Apartamentos and was very happy with the choice too.

*If this best tourist attractions in Valencia conviced you that the city really is worth visiting, check out our quick travel guide to Valencia, with all kinds of useful travel tips.