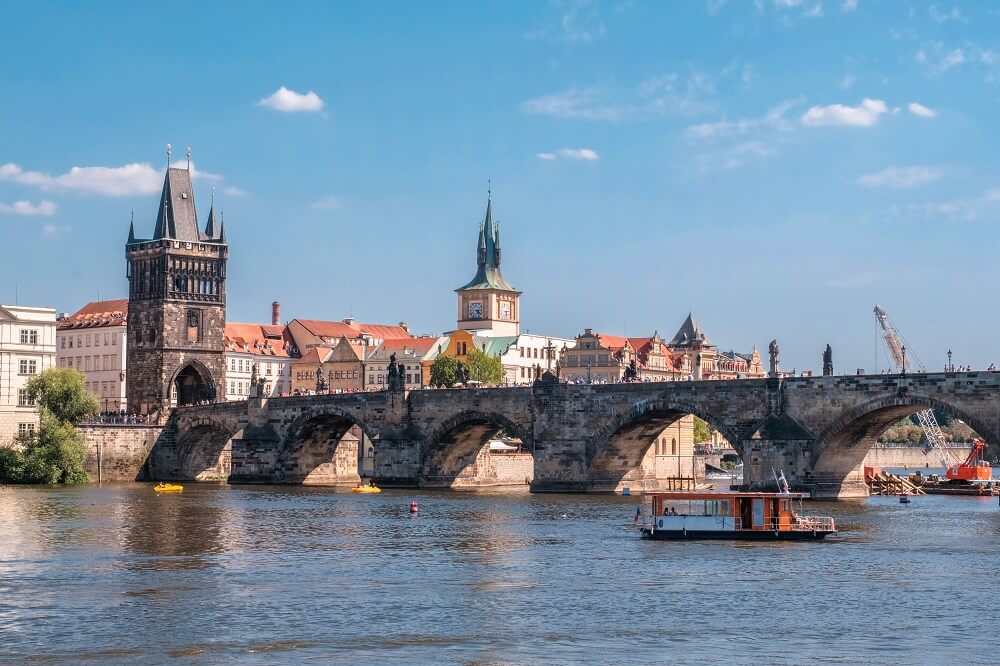 Tourist attractions in Prague are much more than the Prague’s castle and Charles Bridge. The city has 1,2 million inhabitants, so you will find plenty of well-known tourist attractions and little known gems, which make your stay in Prague a little bit different and for sure more authentic.

Prague’s Castle was built in 9th century and if for sure is one of the most recognized and best known tourist attractions in Prague. The castle complex is actually so vast (70.000 square meters) it also got a place in the Guinness book of world records, as the largest castles in the world. The Prague’s castle was once the seat of Czech kings, but now the Czech president has his official office inside of it.

If you enjoy architecture and traveled to Slovenia, you for sure have heard for Jože Plečnik, Slovenian architect, who had tremendous impact on Ljubljana’s old city center. His presence can also be seen at Prague’s castle, as he did the plans for rebuilding the castle after the WW1.

The story with the famous Charles Bridge started in 1357, when building the bridge took off. The Charles Bridge was actually a replacement for an older bridge, which was totally demolished due to the devastating flood. Until 1841 the Charles Bridge was the only bridge over the Vltava River in Prague. It is decorated with 30 statues and 3 defensed towers. If you are afraid you will have troubles in finding it, don’t be – you will noticed it because of the crowds, as this is also one of the most recognized tourist attractions in Prague.

Astrological clock has been a symbol of Prague ever since 1410. Being the world’s third oldest astrological clock, it does get lots of attention. Did you know that the constructor of the clock was blinded, not to be able to construct another clock like this anywhere else, but now exact replica can also be seen in Seoul. The wooden figures of apostles were added centuries later, but they are one of the main reasons, why also this astrological clock is always put on the list of best tourist attractions in Prague.

City cathedral at the castle (Best tourist attractions in Prague)

Just steps from the astrological clock you can find a large town square, with the old town hall and other beautiful structures. If you are visiting Prague for Christmas, this is also location of their Christmas market – one of the most beautiful Christmas markets in Europe.

The Jewish quarter in Prague was artificially made, as soon the Jews were prohibited to choose living location freely in 13th century. That is when this Jewish quarter started to grow, as exiled Jews from all around Europe started to immigrate in. The Jewish quarter in Prague was completely untouched during the WW2, so it is now the Europe’s best kept Jewish memorial. It includes 6 synagogues and a very interesting old Jewish cemetery. If you are asking yourself why the quarter was not destroyed during the WW2, it is said that Hitler wanted to make an open-air museum for extinct race.

If you find resemblance of Petrin tower with the Eiffel tower in Paris, you are right. It is almost identical, except that the Petrin tower is much lower. Nevertheless, it does offer nice views over Prague and with that it makes it one of the best tourist attractions in Prague.

When John Lennon was assassinated, someone made a graffiti on the wall in Prague. It was covered numerous time, but always manage to pop-up again. Now the John Lennon wall attracts numerous visitors, as the wall is very popular to take photos and sign your name on it too.

Believe it or not, but Czech Republic is not just about the beer. You will find lots of interesting dishes in traditional restaurants for which the food is slowly getting on the list of best tourist attractions in prague. Goulash, bread dumplings, roasted duck, sausages, sweet dumplings with fruit and sauerkraut to name a few. Locals like to enjoy the local beer with fried cheese too. You will see lots of Trdelnik stands in the old city center, but don’t be fooled by them – even though you will read that this is a typical and traditional dessert, it is far from it. Trdelnik was imported from Slovakia about 2 decades ago and due to good marketing, now everyone things, this is traditional Czech dessert. If you want to try something traditional and sweet, make sure to try Kolači. We have eaten some great ones at farmer’s market. If you are not into beer, order yourself the Kofola – some kind of Czech Coca-Cola.

Prague offers plenty different museums – from the traditional ones like city museum, but there are many bizarre museums in Prague too – one of them is for sure the world’s only sex toys museum. Another strange museum is the museum of toilets.

This tiny island can be found right in the center of Prague and is very popular among locals for picnics, concerts, festivals and different sport events and outdoor classes. In 2019 the Strelecky Island also became a cashless zone, so you can forget about cash there, as the only way of payment is credit or debit card. The idea is supported by MasterCard and we really enjoyed the vibe there – not to mention that paying by card is also very practical – not just on the island, but all over the city.

As soon as you will wander around the streets in the old city center, taking you from one tourist attraction in Prague to another, don’t forget that the whole city center is interesting due to it sold and magnificent architecture.

Less known things to do in Prague

One of the new tourist attraction in Prague is the Manifesto market. It is mostly visited by locals, at least for now, and it is a fun place to mingle with friends and trying different world cuisines. The Manifesto is also sponsored by MasterCard so this is another cashless zone, where you should forget about the cash and visit it with your credit / debit card.

You will find several farmer’s markets in Prague, selling locally grown crops and home-made crafts. We have visited Naplavka market on Saturday, which can be found along the Vltava River and tasted some really delicious home-made goodies, including Kolači.

Tourists mostly visit the City Library just because one thing –  the spiral book tower, which looks like it is made in endlessness.

Letna Park is another location, popular among locals. You will find some Biergartens there offering really nice views over the Prague.

Vyšehrad fort can be seen from afar and you will recognize it easily. The two tower fort is hardly visited by tourists, but a walk up, will charm you with nice views and its park too. It was built around 10th century.

Prague has seen tremendous development in culinary. You will find plenty cafes, serving you with their own roasted coffee, trendy bars where younger generation meet and more and more restaurants, serving good food, which is far from the traditional one.

To find the best foodie locations, get yourself the Prague Foodie Map. With the help of the book, we found many great locations and yummy bites. They also offer great food tours.

If you are traveling to Prague during the summer and have enough time to see something outside of the city center, go for the city beach Žlutne Laze.

If you will walk around Prague  strange and unusual sculptures will for sure catch your attention. Most of the sculptures are work of Czech artist David Černy. To see them all, you will need to wander outside of the old city center.

You will see many stores in the old city center selling mole toys, magnets, cups etc. One of the most popular cartoon in Czech Republic (formal Czechoslovakia) was the animated character the Mole.

The narrowest street in Prague

The street would not be anything special if it would not be the narrowest street in Prague. It is just 50 meters wide and it is impossible for two persons to meet – that is why it even has a traffic light. 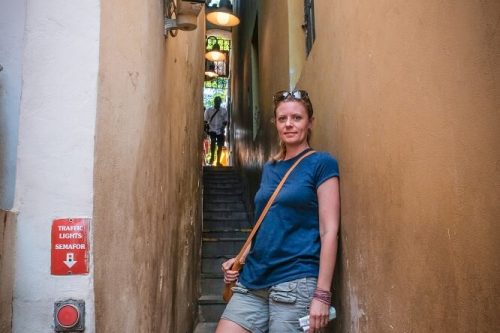 The narrowest street in Prague (Best tourist attractions in Prague) 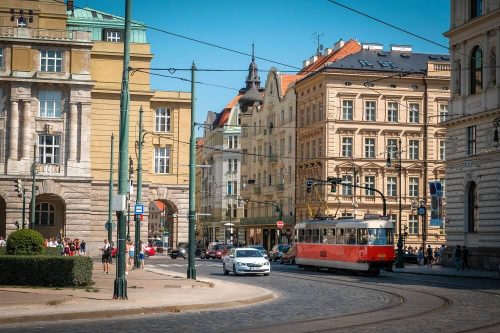 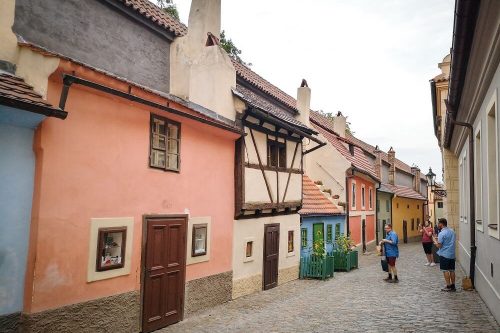 The Golden lane on the castle (Best tourist attractions in Prague)

Church of the most Sacred Heart of Our Lord

Not far from the old city center lies the most important sacral building from 20th century. If you are into architecture and work of Jože Plečnik, this should get on your bucket list as well.

Tourist attractions in Prague are very diverse and definitely not just for those interesting in history and architecture. A trip to Prague is also great for a city break, where you join sightseeing with visiting trendy cafes and restaurants.

Check out the most amazing tourist attractions in Prague in our video here too.