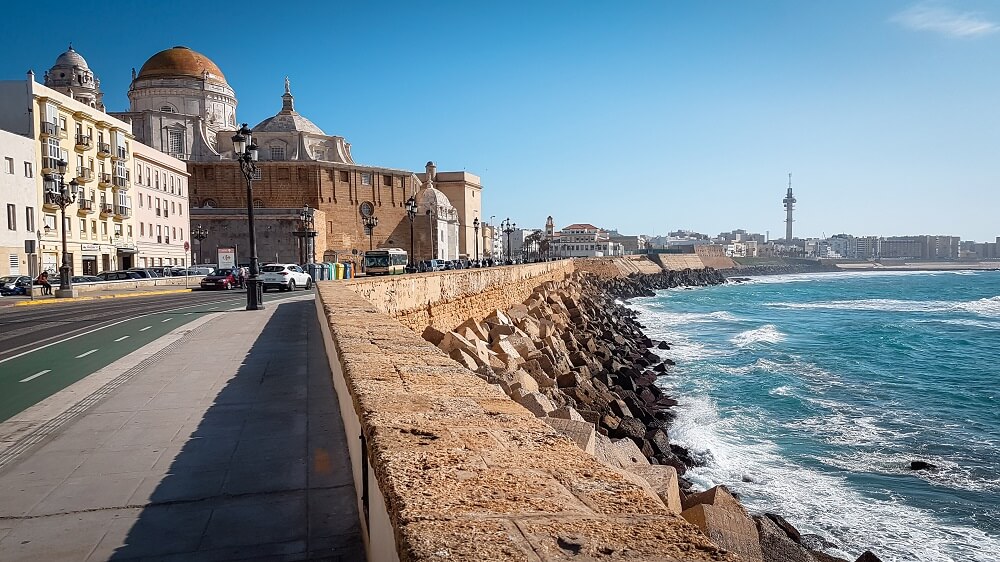 Andalusia travel itinerary which takes you to some of the best tourist attractions in the region and you will only need one week for it.

Our Andalusia travel itinerary starts with arrival to Seville. Take your time to relax after the fligt, settle in the hotel and if you have the time and energy, explore surrounding of the hotel.
You will leave the most popular things to do in Seville for your last two days, so the only thing you need to do is walk to the Santa Justa train station and purchase the return tickets for the fast train to Cordoba.

Hotel recommendation: Hotel Plaza Santa Lucia – a solid budget hotel in the old city center, 15 minutes on foot to the train station, what makes it perfect for the next day. The room rate includes good breakfast and staff speak some English. The hotel has a small roof-top pool, with nice views over the city.

Continue your Andalusia travel itinerary and head to Cordoba with the fast train after breakfast. Be there in time, as the security control before the train ride is almost as sharp as on the airport. We needed only 45 minutes by fast train to reach the old city center in Cordoba.

Thousand years ago Cordoba was the largest city in the world, which can easily be compared to Constantinople (Istanbul), Damascus and Baghdad. Cordoba has been on the Unesco world heritage list since 1984. With all the amazing tourist attractions in Cordoba, the city really is like an open air museum, so make sure to take enough time for them all.

Hotel recommendation: Hotel Riviera – small, budget, but comfortable hotel, which is close to all the main tourist attractions in Cordoba and not far from the central train station either. The breakfast is not included in the price, but can be ordered in the cafe opposite the hotel.

Catch the early fast train back to Seville, where you pick-up the rented car right at the train station (we booked it upfront at Economycarrentals). The Andalusia travel itinerary is taking you to Cadiz. The city on the Atlantic Ocean coast is known as the oldest continuously settlement on the Iberian Peninsula, It is also the main harbor of the Spanish marine ever since 18th century.

You will find several tourist attractions in Cadiz (San Sebastian fort, city walls, Roman amphitheater, old squares and neighborhoods), but the most important is the 18th century cathedral, which was built on the older, burned to the ground, cathedral from 13th century.

An interesting stop in Cadiz is also Santa Catalina fort from 17th century, right next to the Atlantic Ocean. It is fascinating to see its story and how the fort was ruined due to the massive explosion in 1947. The entrance is free of charge.

After an afternoon spent in Cadiz, this Andalusia travel itinerary will take you in direction of Gibraltar. Before reaching Gibraltar stop at the old town of Tarifa, which is the southern point on Iberian Peninsula. From here, Africa is only 24 kilometers away.

Tarifa is well known for the birds and mammals. Out of seven different whales, you can spot four different ones here, including several types of dolphins. Everyone, enjoying water sports, will for sure stop in Tarifa for more than just an hour or two, as the place is perfect for kite-surfing and wind-surfing.

Your last stop for today is the harbor town Algeciras, a base for ferries reaching Tanger and Ceuto in Africa. You can already notice the Rock in Gibraltar from Algeciras.

Hotel recommendation: Hotel Marina Victoria has a good location, especially for walking down the local market and continue your Andalusia travel itinerary to Gibraltar.

After a stroll around the local market, stock with veggies, fruit, seafood, meat and cheese, head straight to Gibraltar. Park your car at the big parking before the boarder and cross it on foot to avoid long ques. Hop on the mini bus tour, which takes you too all the major tourist attractions in Gibraltar (St. Michael cave, Pillars of Hercules, Monkey mountain) in less than 2 hours.

The Andalusia travel itinerary will take you to a famous white village Ronda, which is also your last stop for today. The white villages are one of the most popular tourist attractions in Andalusia and originate from 15th century, when the Islamic rule ended and Muslims settled the heavy and almost impossible locations for their protection. Ronda is divided into two parts due to the Guadalevin River. The river cut deep into the 100 meter high canyon, on top of which Ronda is located. Both parts of the village are connected with three bridges – Roaman Bridge, Old Bridge and New Bridge. The New Bridge dates from the 18th century and is the largest and the tallest (120 meters high) and is the symbol of Ronda.

The second most important tourist attraction in Ronda is the bull fighting arena (Plaza de Toros de Ronda), which is the oldest bull fighting arena in Spain. It was built in 1784 and each year hosts unique and historical bull fight Corrida Goyesca. In the Middle Ages bull fights represented a symbol of luxury in Spain and were reserved only for the rich and noble. In 18th century the bull fighting got new rules, which were written by a famous bull fighet Francisco Romero from Ronda. That is why Ronda is now known as the cradle of bull fighting.

Apart from the bull fighting arena, you can also visit an interesting bull fighting museum and the stable with its riding school.

Did you know that the bull tail is still known as one of the most popular culinary specialties in Andalusia and can be served on different varieties – one of many is also the Ronda’s way – very tasty and would recommend it to everyone like trying new and different things.

If you have time before reaching Ronda, you might want to squeeze in also the blue village Juzcar, where the smurfs movie was shot. In fact, the village was colored in blue color only for the movie and from then on, the houses got its blue look. We did not find it any special, but you might like it.

Hotel recommendation: Hotel Colon – our favorite hotel in this Andalusia travel itinerary, with good breakfast. The parking is not free of charge though, but the guests get a discount.

This Andalusia travel itinerary will take you back to Seville after breakfast, where you will return the rented car. You will have 1,5 days to explore some of the best things to do in Seville.

Make sure to see the cathedral, the Giralda tower, the Royal Palace Alcazar, parks and gardens, which are like botanical gardens thanks to Christopher Columbus and the seeds from the New World. You can find the best things to do in Seville in a special post here.

Hotel recommendation: Hotel Plaza Santa Lucia – for a good budget option we would recommend the same hotel as for the first day in Seville.

The statue of Murillo painter (Best things to do in Seville, Spain)

The Spanish square, presenting Barcelona (Best things to do in Seville, Spain)

One week for the perfect Andalusia travel itinerary is still not enough to see everything (we left Grenada and Malaga), but one week is still enough to realize you will have to return for more of its amazing history, energy, good food and friendly people.